A Type 42 destroyer lying at anchor off South Georgia. 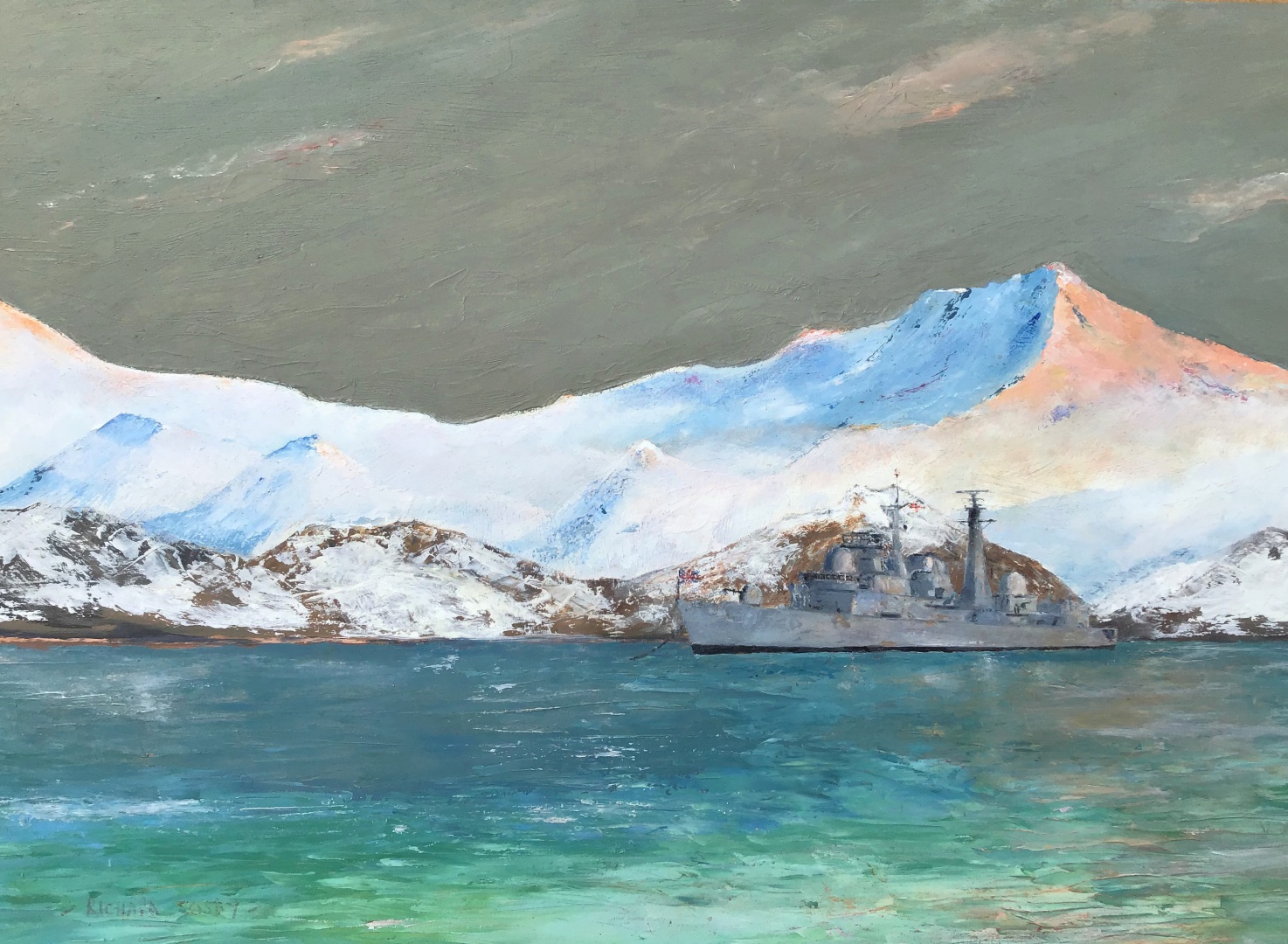 For many years after the Falklands Campaign of 1982 the Royal Navy stationed a task group of some 6-8 warships and auxiliaries in the South Atlantic. Still with their pennant numbers painted out and colourful ship's boats now a drab grey - but no longer with the black stripe (inevitably known as the “aiming mark”) down the funnel to distinguish the British destroyers from their 2 Argentinian sisters - the Type 42s were especially busy during this decade: the ARMILLA Patrol in the Gulf required one air defence ship at all times as well as two other warship types and the South Atlantic another Type 42, if not two, as well as several other types and RFA support and merchant tankers too.

Although formally tasked by Commander British Forces Falkland Islands (CBFFI) to visit the Dependency of South Georgia at regular intervals to show close and continuing British interest, ships of the task group invariably saw this task as an escape from the more mundane patrolling off East and West Falkland and it was a 10 day detachment that was eagerly anticipated by ships' companies. The 900 mile long passage down there from Port William Stanley was frequently rough – very rough -  though if you were lucky you got away with a reasonable sea state on one leg or the other but it was as well to plan for “roughers” both ways! Some of the seas encountered were truly huge.

Arrival in anchorages such as this off South Georgia's rugged east coast  was always a welcome relief, for although it was still subject to violent squalls and rapidly changeable weather, when the wind was behaving and the scenery at its most spectacular, the air so clean and clear, it was a marvellous place to lie at anchor for a few days. From here ships' boats would send parties ashore for walking, rummaging through old whaling stations' storehouses and generally just enjoying the wild and beautiful landscape and creatures. And for sharing, too, your picnic lunch with many dozens of inquisitive, fascinating and smelly penguins! The little Norwegian church down the coast at Gritviken could be used for Sunday Church (though you needed someone onboard who could play the antique organ there) and there was Shackleton's grave to visit and the British Antarctic Survey Team and their wonderfully warm huts and hospitable residents too.  Supplies of reindeer meat and squid were plentiful, and provided you always remembered that the sea was at, or just below, freezing, that the sun could suddenly disappear as the wind took off, and that the chill factor could then be a killer, it was a very popular “run ashore” for all.  The warships arriving at or near the harbour at Gritviken also proved welcome to the resident 120 strong Company of soldiers whose parent battalion was stationed in the Falklands far away up to the north west.  The soldiers down here in South Georgia (the Company commander was also invested with the title of Queen's Harbour Master and Postmaster General) delighted in the arrival on their doorstep of the warship with her helicopter which could be used by the soldiers for recces and the like, hot showers, draft beer, Melton Mowbray pork pies, fresh films to watch and a pleasant change of faces and bad jokes that the Navy brought them for a few days!