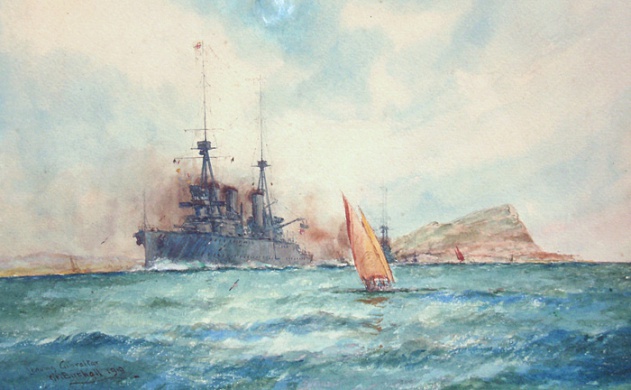 Although he has dated the painting 1910, the artist does not identify the subjects of his watercolour: but they are very clearly ships of the new Invincible class, in 1910 still classified as “armoured cruisers”. This was to change soon after with the issue of Admiralty Weekly Order No 351 of 24th November 1911 which stated “All cruisers of the Invincible and later type are, for the future, to be described and classified as battlecruisers in order to distinguish them from armoured cruisers of the older type.”

In April 1909 the three ships (the last to enter service was INVINCIBLE in March of that year) were formed into the 1st Cruiser Squadron under Rear Admiral The Hon Stanley Colville CB CVO. His flagship was HMS INDOMITABLE (Captain Charles de Bartolome RN) and she is easily identifiable here in the foreground as she is wearing Admiral Colville’s flag at the fore. Astern of her is either HMS INVINCIBLE (Captain Mark Kerr MVO RN) or HMS INFLEXIBLE (Captain Charles Napier RN); and amongst the dense clouds of coal smoke in the background is a flurry or two of escorts - light cruisers and torpedo boat destroyers. Guarding the Strait of Gibraltar as ever, is the Rock, headquarters of Admiral Superintendent Gibraltar, Rear Admiral Frederick Pelham in his flagship HMS CORMORANT.

William Minshall Birchall was born in Iowa, America, in 1884 where he made a name as an illustrator and portrait artist before emigrating to England: here he settled on the south coast at Hastings. He has 5 watercolours hanging in the National Maritime Museum, Greenwich and a further 7 in the Peabody Museum, Salem. He invariably manages to add an atmosphere to his watercolours, this one being no exception as he portrays these huge, ultra modern leviathans surrounded by their fussing escorts storming their way out of harbour, whilst the crew of the saffron sailed tartane in the foreground can only wonder what exactly is roaring past them with so much noise and such self importance!