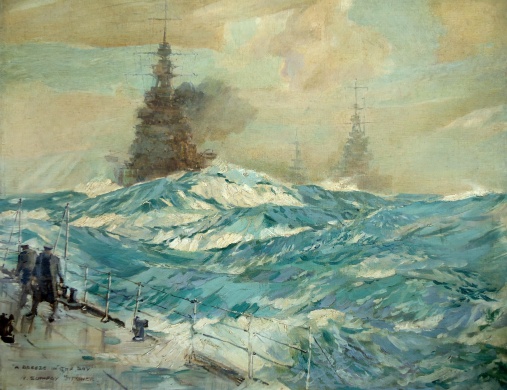 "A Breeze in The Bay" is the wonderfully understated title Sotheby Pitcher has given this canvas which depicts 4 battleships crashing their way through the Bay of Biscay in anything but "a breeze" - its blowing a real bastard and this is the Bay living up to its reputation!  Large seas are rampaging across the canvas, the quarterdeck of the capital ship in the foreground is being washed over and two seamen in oilskins but with no lifelines are securing, perhaps,  a piece of gear that has broken adrift?   Its a picture full of movement  and with a stormy looking sky and wild sea state its an evocative painting of "Britain's Sure Shield"........

Neville Sotheby Pitcher was a well respected artist of his day, seascapes and landscapes being his theme. A member of the Royal Institute of Oil Painters and the Royal Institute of Painters in Watercolours he also hung at the Royal Academy and illustrated many nautical books of the time. He joined the RNVR in World War 2 which, we are told, heightened his appetite for painting  maritime scenes.  He was clearly a good draughtsman who knew the proportions of the ships he painted and his seas are superbly well observed and executed.