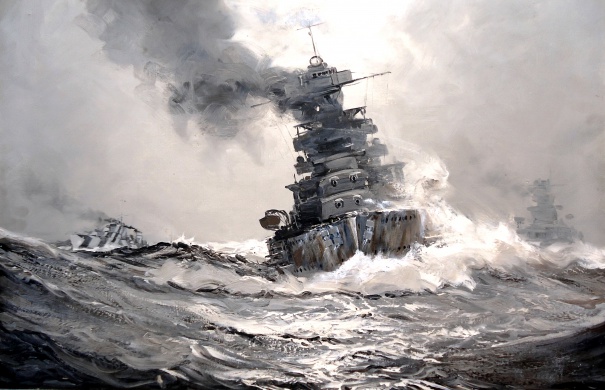 The style and sheer competence of this oil painting suggest that it has to be by one of the masters of this type of maritime scene:  Charles E Turner, Montague Dawson, William McDowell, R W Jobson - perhaps Oscar Parkes?   Not only is the draftsmanship of the foreground battleship of a high order but the heavy sea through which she and her fellow capital ship on her port quarter are crashing is also superbly executed: the hand that painted this knows a thing or two about how a large ship pushes and shudders her way through the sea.  On the windward side (the battleship's port side) we see the sea being shouldered aside by the battlewagon and thrown up wind and into the teeth of the gale - whereupon its caught and flung back downwind against the sides and superstructure of the battleship with force.  The seaboat - hoisted out and at the ready for instant use - is particularly vulnerable to this spray and spume being flung downwind by the gale and gets a very heavy dowsing - all spectaclularly shown here as are the cascades of solid green water pouring off the upper deck.  But nothing deters the battleships!  Life for those exposed in one way or another on the upper deck or bridge is miserable: wet, cold and made more unpleasant by the shuddering and pitching and rolling of the ship.  Even high  up on the compass platform the officers of the watch and bridge staff will not be immune from this sort of sea and in their lofty position they will be getting sodden as sheets of spray - and sometimes worse - lash across their faces and drip down betwen their layers of clothing, oilskins not being too effective in this sort of weather! The Watch on Deck under the leadership of the Petty Officer of the WOD will be similarly half drowned though experience will have taught them that there is shelter of a kind to be had in the lee of  the superstructure, especially around the hot funnel casing where there will almost invariably be delicious, warming smells coming from the galley area too!  Just surviving the weather was the aim:  and if its unpleasant in a battleship think of those escorting destroyers, the "tin cans"...!

Charles Eddowes Turner, with many years at sea in the Royal Navy, was one such artist who knew what a heavy sea looked like and his ships and seas are expertly observed: many of his most celebrated paintings are indeed of rough weather such as shown here (especially well known as it hangs in the Maritime Museum at Greenwich is his iconic painting of BISMARCK's final minutes in a north Atlantic heavy swell and gale).  A regular exhibitor at the Royal Academy and with many of his works now in the Imperial War Museum and the NMM at Greenwich, Turner was already held in high regard before the war and in 1940 he was commissioned by the Sphere and Illustrated London News to provide regular illustrations of events in the war at sea 1939-1945:  he did, it seems, fail to sign or date a number of these works. Whether this was because his illustrations submitted for the magazine would have his name underneath them amongst the descriptive text anyway, or whether it was something to do with the fact that his paintings would all be subject to the Admiralty censor (who would be eager to prevent the painting showing any radar aerials or other equipment which might aid the enemy to assess its size and therefore the wavelength on which it operated) is unclear but that might explain also the lack of a date to the painting.

Could it be by the hand of Montague Dawson (1895-1973) perhaps? Its possibly one of his oils but he did generally sign his work, much of which also appeared in the Sphere magazine as he, like Turner, had been granted special facilities by the Admiralty to enable high grade paintings to be available to the Sphere's (and ILN's) readership. William John Patton McDowell (1888-1950) was a professional artist before the outbreak of the Second World War and in 1940 he joined the Royal Naval Scientific Service though still continuing to paint and illustrate, also for the Sphere. He generally did sign his work, though the date of this painting (the battleship, a Queen Elizabeth or Revenge Class, showing a heavy buildup of superstructure and fighting top such as the ships had by 1939 - 45) would tie in with his period of illustrating for the Sphere. The dazzle painted destroyer bucking and thrashing around on the battleship's starboard beam, is very much a Second World War type; how they will be cursing their luck for being in a small ship in this gale as they look out to port at the stately battleships...... Many unknowns in this painting but its quite superb and my money is on Charles EddowesTurner as the artist!