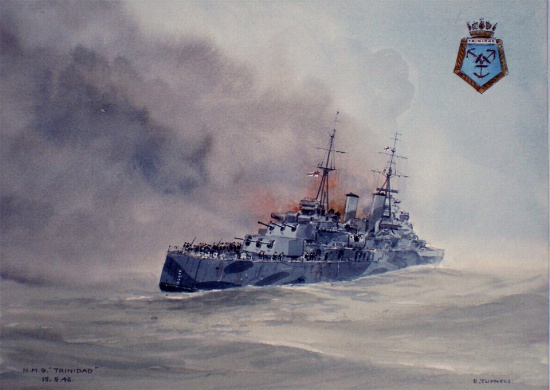 Royal Marine Musician George Lloyd was serving in the light cruiser HMS TRINIDAD in March 1942 when she was ordered to provide close cover to convoy PQ 13 sailing from Iceland to the Kola Inlet, North Russia. Attacked by 3 German destroyers, TRINIDAD fired a torpedo which, probably because of the icy sea temperature, went rogue, turned on its heel and hit TRINIDAD on her port side in the vicinity of the Royal Marines’ barracks, damaging her severely. Musician Lloyd was the last out of the Transmitting Station before the hatch had to be shut to try and stem the inrush of water. He survived as did the ship who managed to limp to the Kola Inlet where temporary repairs were effected. Two weeks later whilst on the return journey to Iceland, TRINIDAD was again attacked, this time by bombers, and received massive damage which proved to be fatal and HMS MATCHLESS was ordered to sink her with torpedoes. Tragic.

Lloyd went on to become a well respected composer whose music has featured before at the Last Night of the Proms, although not his HMS Trinidad March which received its Proms premiere on Sat 7th Sep 2013: it was played immediately before Rule Britannia!