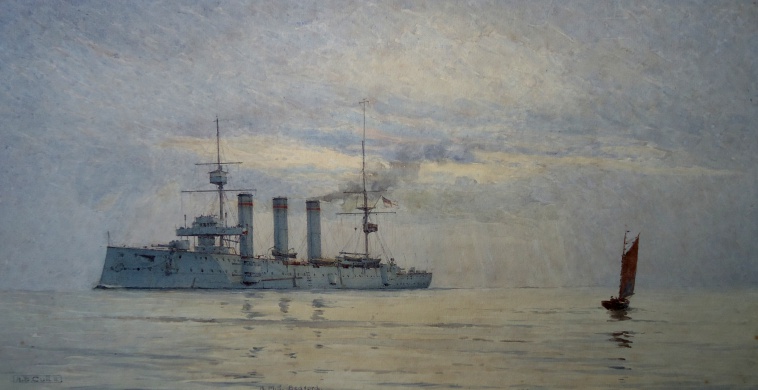 HMS BEDFORD, painted here by Alma Cull on a glassy flat sea, was one of ten ships of the Monmouth Class, 10,000 ton armoured cruisers which entered service between 1903-1904.

By 1910 she was out on the China Station and commanded by Captain Edward  Fitzherbert.  She came to public attention in August of that year when she ran hard aground in the Yellow Sea on passage from Wei Hei Wei to Nagasaki with fellow ships of her squadron.  During the Middle watch on the 20th August BEDFORD started to work up for a full power trial and gradually forged ahead of the others.  Off her intended track by some 25 miles (as it later transpired),  she struck Samarang Reef at a speed of some 20 knots ripping out the bottom in the vicinity of the forrard boiler room.  All the engineers except one who were closed up on the plates and in their vicinity were killed and the ship became a total loss.  Prolonged overcast skies which had severely limited astro-navigation opportunities, coupled with abnormally strong currents were arguments raised in defence of the captain and navigating officer, but both were severely reprimanded and dismissed the ship at their subsequent courts martial. a decision regarded as unreasonably harsh by very many in the Navy.

But Edward Fitzherbert lived to fight another day and in June 1914 he was appointed to the dreadnought battleship HMS COLOSSUS.  He commanded her until October 1915 when he was relieved by Captain Dudley Pound, who was subsequently to become First Sea Lord in 1939.  Edward Fitzherbert himself went on to retire as a full admiral in 1925; in 1932 he succeeded to the Barony of  Stafford and he died in 1941 aged 77.

HMS MONMOUTH, the name ship of the class, came to a sad but brave end in the early months of World War 1. She was part of Admiral Cradock’s squadron that attacked Admiral Graf Spee’s ships off Coronel, SW Chile, in October 1914 and was lost with all hands.  It must therefore have been  particularly satisfying for HMS KENT, another sister, to be part of Admiral Sturdee’s squadron that exacted revenge on Graf Spee’s ships a few weeks later.  Involved in a neck and neck stern chase KENT resorted to burning the wardroom furniture in her furnaces to gain the extra knot or two necessary to overhaul, catch and sink SMS NURNBERG!