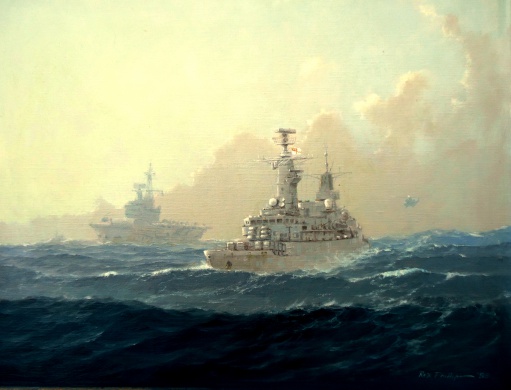 Rex Phillips,  a retired navigating officer of the Royal Navy, has spent many, many years staring out from bridges of ships and noting the moods of the seas and skies: this oil painting bears all the hallmarks of being painted by a long experienced old hand!  A cheerless dawn reveals the South Atlantic in its usual moody self: there is a strong ground swell - the result of a recent gale or two - which is more than enough to give the carrier HERMES and her screening frigate BRILLIANT a tiresomely uncomfortable time.  There isn't anything more than a Force 5-6 actually blowing at the moment but heavy rain squalls are coming in at frequent intervals, reducing the visibilty to a few hundred yards and making everything more difficult and cold for those working flight and upper decks.  The ships are rolling a bit, pitching a bit more, the Sea King helicopter off BRILLIANT's port quarter is awaiting his moment to start the transfer and the Officer of the Watch on BRILLIANT's bridge is watching HERMES like a hawk to ensure BRILLIANT remains clear - so is Captain John Coward!  It's his prime concern whilst his ship is just a few cables off Captain Middleton's port bow: finish the helo transfer and they can open out a little.....

A skilkfully executed oil painting which has captured the atmosphere exactly: Rex Phillips has also painted the Type 22 frigate with all her quirky shapes and angles and domes superbly.  This is a fine and accurate picture of the Royal Navy's daily, routine activities in the South Atlantic during that war of 1982 and the many years spent patrolling down there by countless HM Ships and RFAs for some two decades afterwards: indeed there is  still a guardship or two on station in the South Atlantic to this day.