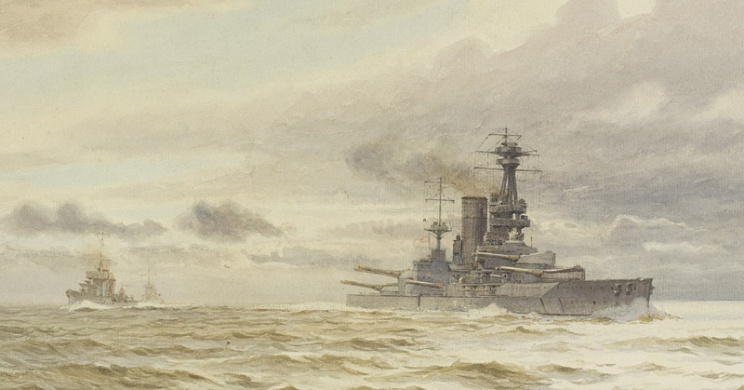 Built by Armstrong at Elswick 1911-1915 to order for the Chilean Navy and originally named VALPARAISO, this ship was essentially a lengthened Iron Duke but with shorter focsle, extra space for main machinery and a greatly lengthened quarterdeck. Having been renamed by the Chileans ALMIRANTE LATORRE, under direction from the First Lord of the Admiralty, Mr Winston Churchill, the ship was purchased from Chile by Great Britain in September 1914 whilst fitting out, and renamed again, this time HMS CANADA. Modified for RN service she joined the Grand Fleet in October 1915 and with her ten 14 inch and 16 six inch guns was a welcome addition to Admiral Jellicoe’s dreadnought numbers.

As this rare painting, owned by the Officer’s Mess, Commando Training Centre Royal Marines, accurately shows she had a very imposing appearance  the shortened focsle, raised and enlarged funnels and apparent trim by the head - making her stand out from the crowd; the wonder is that this distinctive looking dreadnought bearing such a fine and proud name, was not painted more by artists of the time. This watercolour is a therefore a special find indeed!
HMS CANADA was in the Grand Fleet’s battle line at Jutland in 1916 and gave valuable and hard service throughout the Grand War. On cessation of hostilities in 1918 she started a refit in Devonport to return her for service in the Chilean navy and she sailed for Chile in 1919 named, once again, ALMIRANTE LATORRE (although her quarter name plates read only “LATORRE”). She returned to the UK for a big refit in 1929 and remained in commission in the Chilean navy until the early 1960’s.

AB Cull enjoyed the patronage of King Edward VII and is a hugely respected artist today. The pity is that he died in 1931when aged only 50 and that the majority of his paintings, stacked up in his studio in Portsmouth, were destroyed by a bomb in 1940. The Royal Collection owns several of his paintings.