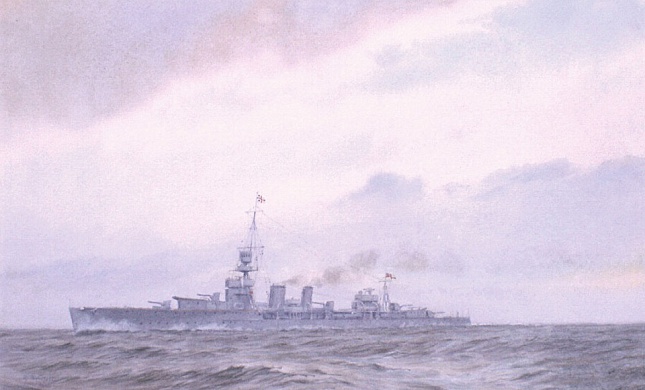 This watercolour is dated 1925 by Cull and its very typical of this artist: beautiful colouring, fine draftsmanship and intricate detail which becomes apparent on closer inspection thus preventing it from being 'chocolate boxy'.

In 1925 the Ceres Class cruisers, CARDIFF, CERES, COVENTRY, CURACOA, and CURLEW (there were Caledon, Cairo and Capetown sub groups too) were in the Mediterranean as the 3rd Cruiser Squadron under Rear Admiral J W L McClintock CB DSO, Rear Admiral Commanding 3rd Cruiser Squadron with his flag in HMS CARDIFF (Captain the Hon St Aubyn Wake RN) and there is every reason to believe that this is indeed CARDIFF: everything fits. She had been launched in April 1917 and commissioned in the closing months of the Great War, in time to be given the immensely important role of the Grand Fleet emissary sent ahead to make contact with, and lead in towards surrender, the German High Seas Fleet in November 1918. No sooner had she discharged this duty than she, together with her squadron, sailed for the Baltic where she had a harrowing year dealing with disputed territories and displaced persons  and egos  following the collapse of the Russian and German empires.

The Ceres Class were considered the finest light cruisers of their day so it was inevitable that they would be deployed to what was then the crack fleet of the day, the Mediterranean Fleet. CARDIFF's Executive Officer at the time of this painting was Commander H E C Blagrove (later Rear Admiral) who, together with some 830 others was to lose his life when his flagship, HMS ROYAL OAK, was torpedoed by Gunther Prien in U-47 in Scapa Flow on 14th October 1939.