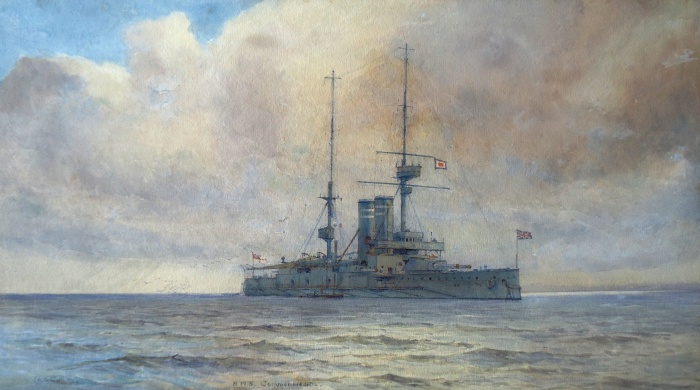 HMS COMMONWEALTH was the third of the King Edward VII Class battleships to be ordered, her keel being laid at Fairfields in June 1902. There were 8 ships in all in the class, the last being HIBERNIA who was laid down some 2 years later.  Although the class did eventually prove popular with the fleet and those who served in them (though their low freeboard meant that the messdecks were very wet in heavy weather), they were not widely welcomed when they first commissioned: "underarmed for their size" and " coal bunkers inadequate to allow them a decent range" being two widely held criticisms.  Their poor steering and inablilty to hold a course also came in for unfavourable comment and by the outbreak of the Great War in 1914 the class had acquired the sobriquet "The Wobbly Eight".  Certainly Cull's celebrated oil painting of 1912 "King Edward VII Class battleships at Sea" in possession of the Maritime Museum, Greenwhich, shows to great effect this tendency of theirs to steer crabwise: no use rapping the quartermaster over the knuckles, it was their balanced rudders that were to blame!

COMMONWEALTH had a busy but unexceptional war, was de-commissioned in 1921 and along with many other of the Royal Navy's now surplus capital ships was broken up in Germany in 1921, a move to try and alleviate the severe hardships that that country was experiencing, and to give her all but collapsed heavy industries some gainful work.