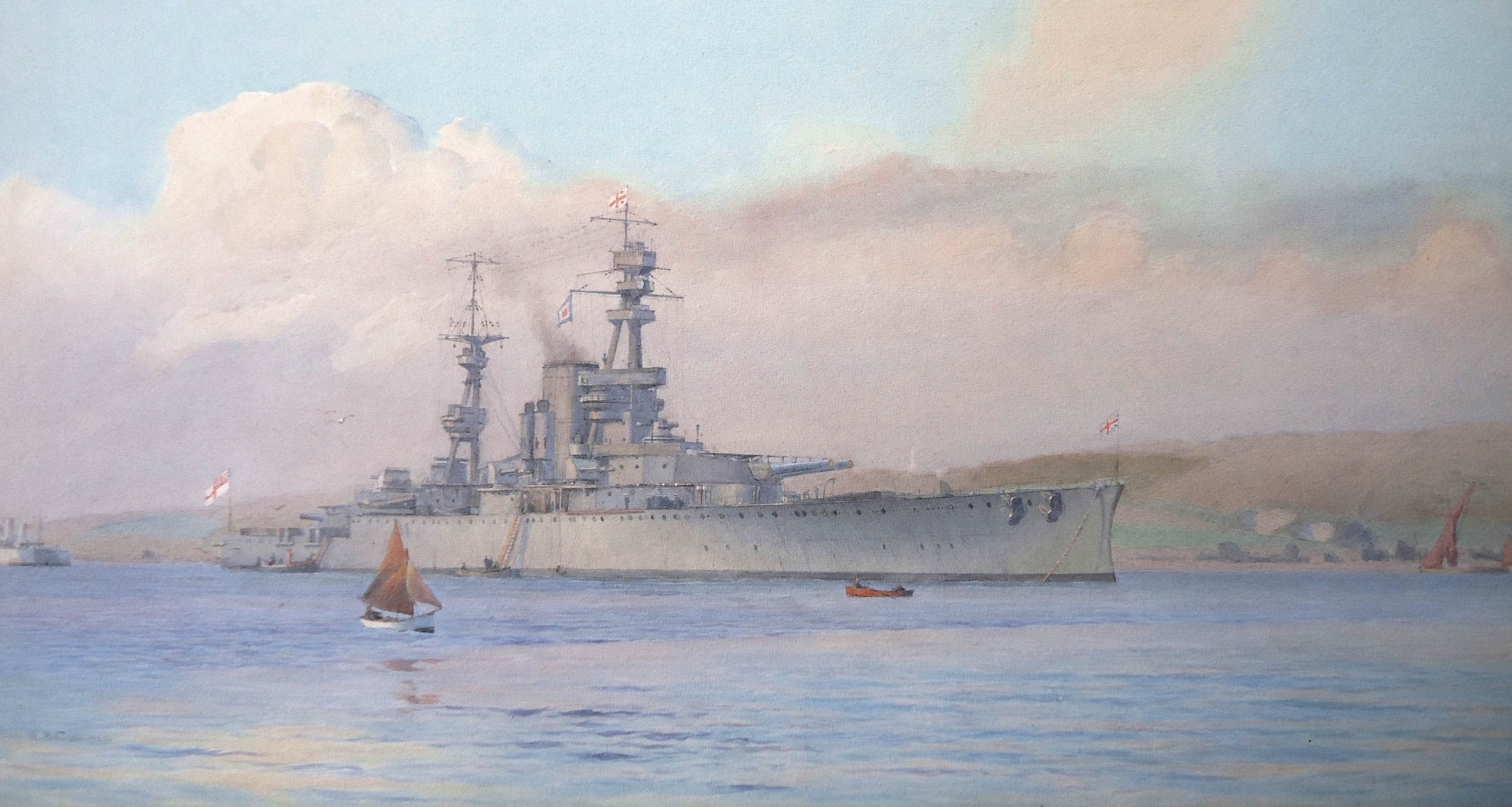 Cull has shown us a last glimpse of the beautiful lines of this controversial battle cruiser before she was taken in hand for conversion into an ungainly looking aircraft carrier.   As usual he has observed his subject minutely and we have a highly accurate painting of the battle cruiser wearing Rear Admiral Greatorex's flag in a tranquil setting with a delicate sky and sea and plenty of activity onboard the ship and on the water around her. One of her steam pinnaces is delivering an officer to the starboard after ladder and a work boat is lying alongside starboard for'ard:  a muster of the hands is taking place abreast the for'ard main turret.   Also clearly shown by Cull are the flying off platforms fitted atop both 15 inch turrets; and the mining rails on the quarterdeck.   The location is not clear but is perhaps one of the great estuaries of the UK - Falmouth, Harwich, the Thames off Sheerness?  (a Thames Barge shown ghosting up the estuary inshore of the battle cruiser lends weight to this location). These were well favoured watering holes of the Navy in those days and also places where large trots of laid up warships were often gathered as the comparatively fresher waters of these estuaries delayed salt water corrosion of the reserve ships' hulls.  There does appear to be a trot of reserve fleet destroyers on the left of the painting.

In 1915 the First Sea Lord, Admiral Sir John Fisher, ordered that two battleships who were languishing on the drawing board be redesigned as fast battle cruisers: RENOWN and REPULSE were, he stated emphatically, to be completed within 15 months although, in the event, they overran by some 5 months, still a pretty amazing achievement.  Having got the building of these two ships underway the energetic First Sea Lord went further and in great secrecy - because they were unfunded by the Treasury - he ordered a further three fast battle cruisers, COURAGEOUS, GLORIOUS and FURIOUS.  The first two were to be capable of 32 knots and to carry only four 15 inch guns because with the shallow draft Fisher demanded (necessary for his beloved "Baltic Project")  hull shell plating was thin and both armament and armour had to be severely pruned as well. FURIOUS was to mount two 18 inch guns but some sort of sense prevailed and she finally entered operational service with only one.  Fisher referred to them as "large light cruisers":  to the lads on the lower deck they were OUTRAGEOUS, UPROARIOUS and SPURIOUS when the huge ships (they were some 150 feet longer overall than the Queen Elizabeths) arrived with the Grand Fleet in 1917 patently under armoured and underarmed!  The Grand Fleet Commander did not find it easy to employ these ships and for a while COURAGEOUS acted as a fast minelayer; after the war she was attached to the gunnery school at Portsmouth.

The Washington Treaty saved the trio's  bacon.  Required to reduce her battleship tonnage, Britain was however allowed to build up aircraft carrier tonnage and so it was that all three were taken in hand for conversion to aircraft carriers, COURAGEOUS emerging in her new guise in 1928.  She performed valuable service in the ten years remaining before World War 2, years in which the Royal Navy fought to regain control of its air arm which had been made over to the new Royal Air Force when it was formed in 1918.  She finally met her end on 17 September 1939 when she was torpedoed by a German submarine.

Rear Admiral Clement Greatorex CB MVO held the appointment of Rear Admiral Commanding Portsmouth Reserve from 23 April 1920 – 1 October 1921 and HMS COURAGEOUS (Captain Sydney Meyrick RN) was his flagship.  A label on the back of the painting describes how this painting was given to the admiral by the artist, Alma Cull, together with a note about the admiral's daughter, Clemency, who was allowed to have her 4th birthday party onboard the battle cruiser!