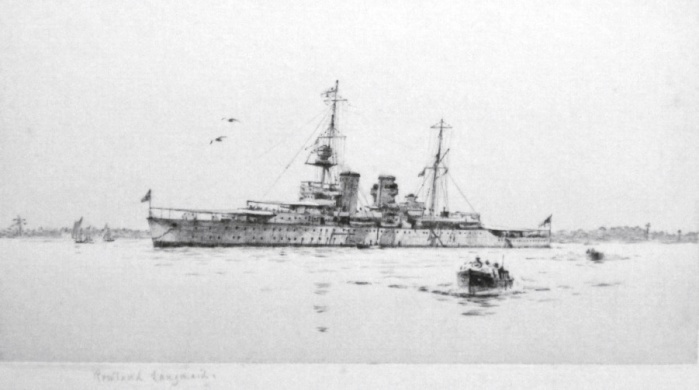 One of a class of four (RALEIGH, EFFINGHAM and FROBISHER were the others), HMS HAWKINS was launched in October 1917 and completed well ahead of her sisters, after the Armistice, in 1919.  She served mainly on the East Indies station in the interwar years - and is shown here by Langmaid as  a flagship -  and during WW2 did valuable service as convoy escort on the trade routes: by 1944 she had reverted to a training role and was scrapped in 1947,  a relatively tame end for her in contrast to two of her sisters!  The newly commissioned RALEIGH was famously  wrecked on the the coast of Labrador in dense fog in August 1922 and was declared a total loss, later being finally demolished as a target a few years  later.  EFFINGHAM, too, had a brush with the seabed, hit an uncharted rock off Norway in May 1940, was found to be beyond economical repair and was  destroyed by friendly forces 3 days later to prevent her falling into enemy hands.  FROBISHEER, like HAWKINS, met her end peacefully - in a south Wales scrapyard in 1949.