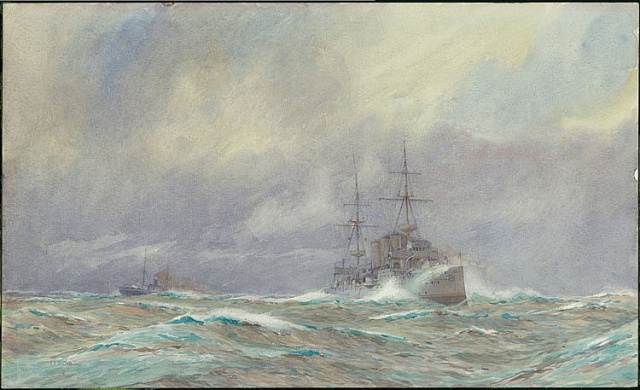 HMS HIGHFLYER was a Second Class Protected cruiser, name ship of the class and launched in 1898: HERMES and HYACINTH were sisters and closely related were CHALLENGER and ENCOUNTER. Of 5,600 tons and with an overall length of 350 feet, the ships were driven by triple expansion machinery which gave them 10,000 shaft horsepower and about 20 knots. They mounted eleven 6 inch guns and two 18 inch torpedo tubes as well as numerous smaller calibre weapons: they were indeed well armed for their size! A half sister, VINDICTIVE and laid down one year earlier than HIGHFLYER, was perhaps the best known of this group winning immortality in the Zeebrugge raid of April 1918. Previously she had also distinguished herself when, as the Royal Navy’s wireless experimental ship, she had been sailed to loiter in mid Atlantic to act as communications relay ship for Admiral Sturdee’s squadron which was sent to look for Admiral Graf Spee’s ships in the South Atlantic, finding and destroying it at the Battle of the Falkland Islands on 8 December 1914. HERMES had become the world’s first seaplane carrier though she was to fall prey to a torpedo in the early months of the Great War.

HIGHFLYER herself had been the flagship for operations mounted off Somaliland 1902-1904 and by 1913 was a training cruiser in which experimental “special entry” officer cadets were carried. To cope with the burgeoning requirement of a fast growing fleet for more officers, public school boys of 17-18 were sent to her for 18 months of seagoing instruction before joining the fleet as midshipmen. They did not therefore go to the Britannia Royal Naval College at Dartmouth and so successful was this “special entry” scheme that it was to be 1957 before it was superseded in a complete overhaul of officer entry schemes.

On 11th November 1914 HIGHFLYER, stationed in the Cape Verde Islands, sank the German Armed Merchant Cruiser KAISER WILHELM der GROSSE off Rio de Oro, Spanish West Africa: the war being some 2 weeks old the German was only 10 days out from Bremen so this was a great feather in Captain Buller’s cap! 1916-1917 saw the ship on the West Africa Station and then in mid 1917 she was shifted to the West Indies Station. Always on the move HIGHFLYER then deployed again, this time to the East Indies Squadron and it was there, it seems, that Cull painted this portrait of her in what were her last days in service. The sea has that monsoon season look about it: a large uncomfortable mud coloured swell with white caps but with those turquoise streaks proving that behind those heavy banks of monsoon clouds there is indeed a strong equatorial sun! In the background to the left we see a steamer of the British India line corkscrewing her way along: she and the cruiser will have exchanged pleasantries by signal lamp. Captain L W Braithwaite CMG RN was to be her last Commanding Officer and it was he who took HIGHFLYER to Bombay where she paid off on 18 March 1919: she was subsequently scrapped there the name being revived for the RN base at Trincomalee, Ceylon (now Sri Lanka) and associated wireless stations that were established there until 1958.