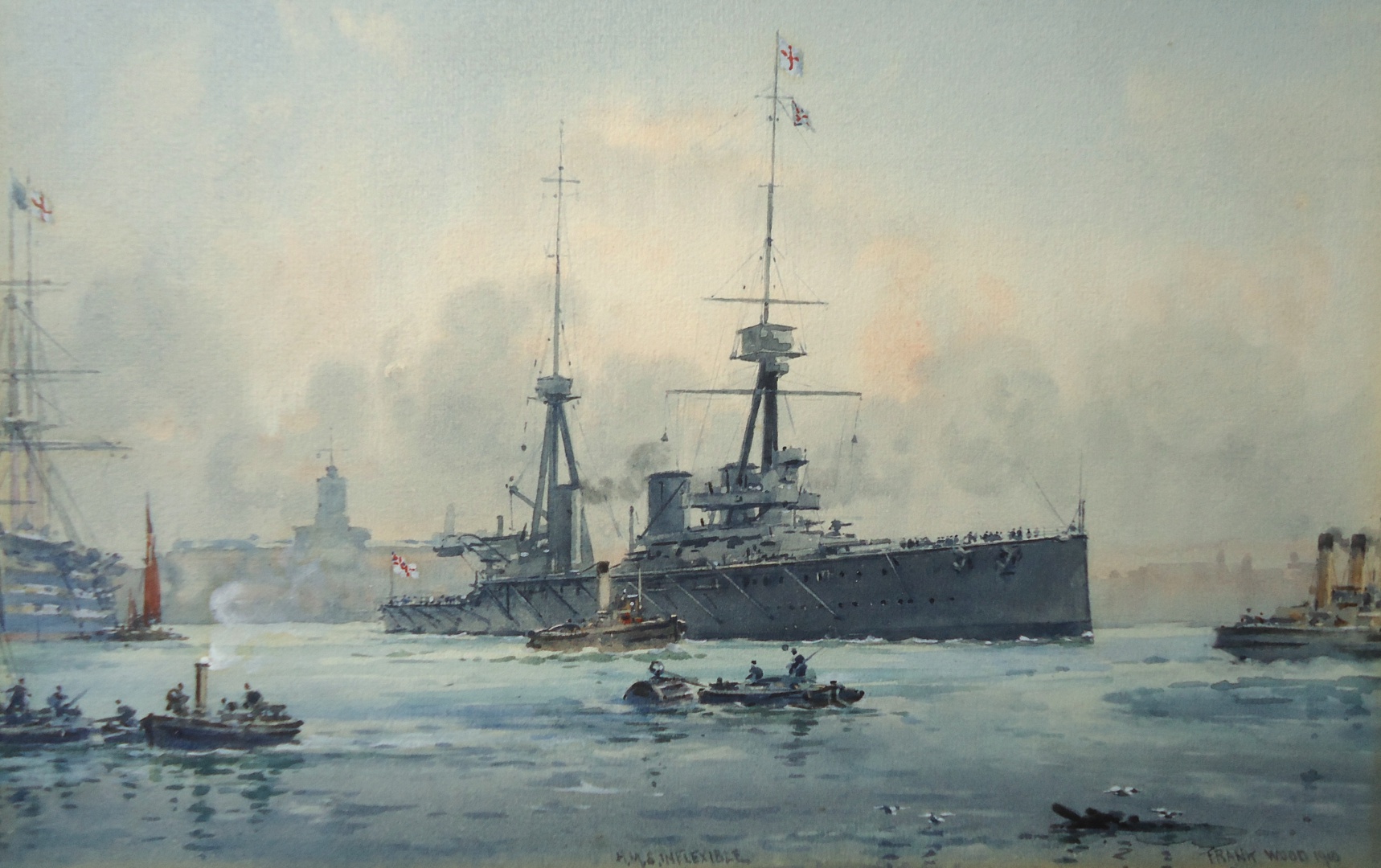 The scene painted here is almost certainly September 1909 when the battle cruiser HMS INFLEXIBLE (Captain H H Torlesse RN) sailed from Portsmouth with her escort, HMS DRAKE (Captain The Hon Hubert Brand RN), for New York to represent Great Britain at the Hudson - Fulton celebrations held in the Hudson River in October 1909.  Embarked for the visit was Admiral of the Fleet Sir Edward Seymour and and an interesting point of flag etiquette arises here!   An admiral of the fleet of the Royal Navy is enitled to fly a union flag at the main and not, as Wood shows here, an admiral's St George Cross at the fore.

Now Wood was a marine artist who knew his onions - he knew what flags were flown by HM ships and he was aware of their significance. Was it that Sir Edward had not embarked in INFLEXIBLE when she sailed that day from Portsmouth but joined  her at sea sometime later for the passage to New York?  In which case who then was the admiral whose flag is flying at the fore? Was this just artistic licence or amnesia on Wood's part; or was Sir Edward really not onboard at this stage?  Further reasearch (including asking Commander Richard Seymour AFC RN, Sir Edward's great grandson, for help) is clearly required! Meanwhile what is not in contention is the ship on the extreme left: HMS VICTORY wearing the flag of the Commander-in-Chief Portsmouth, Admiral Sir Arthur Fanshawe GCB GCVO whose George Cross is clearly visible.

On the reverse of the artist's board on which the watercolour is painted is a label written in black ink in Frank Wood's hand.  It reads: "Title - H.M.S.Inflexible Leaving Portsmouth - £2.12.6  Frank Wood, Cerne [?] Abbas, Park Road Cowes I.W.  No.7".  The painting was given as a leaving present to to an apprentice who worked at Camper Nicholson's boat building yard in Gosport, Hampshire in the 1930s; and hence to his son by descent.