HMS JUPITER on a filthy day 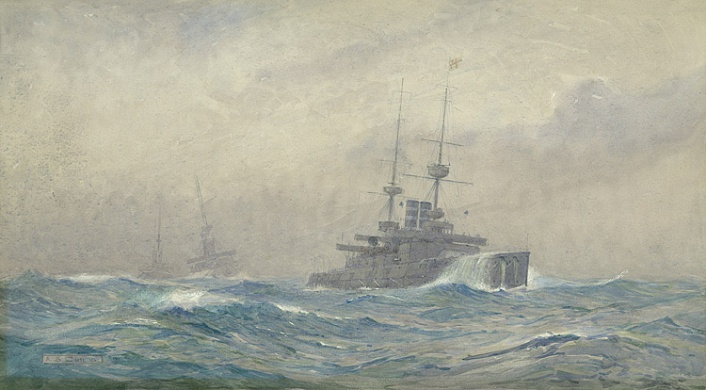 During this period (1905-06) HMS JUPITER was attached to the Atlantic Fleet: commanded by Captain William De Salis MVO RN she flew the flag of Rear Admiral F E E Brock CB. This painting is Cull at his best: big ships rolling their guts out in filthy weather, large seas, leaden, lowering skies, fo’c’sles and gun casemates washing over and streaming cascades of water; bridge, lookouts and upper deck crews sodden and frozen by endless cold spray whipping over them - and green seas soaking them not infrequently too. Conditions down below in the mess decks are hardly more pleasant either with water everywhere, the atmosphere cold and clammy, the ships pitching and corkscrewing as they roll and shudder and shake their way through the seas. Everything sodden, slippery, damp: these 15,000 ton battleships are certainly having a lively day but the patrol goes on.... HMS JUPITER saw service worldwide in the Great War and in 1915 she was sailed north to Archangel, Russia,  as an ice breaker: a year later she was in the East Indies and Egyptian waters. The end of the war saw massive cuts in the Royal Navy, by far the world's largest navy, and JUPITER and her sisters of the Majestic Class were swiftly decommissioned.  The scrap yard claimed her in 1920, some 23 years after she had first commissioned at Chatham.

Provenance: from the estate of an avid AB Cull admirer who lived in Edinburgh, Scotland, this painting reminds one of another Cull, The Wobbly Eight, a study of a squadron of King Edward VII class battleships crabbing and clawing their way through an equally unfriendly sea!  Its in the collection of the Maritime Museum, Greenwich.