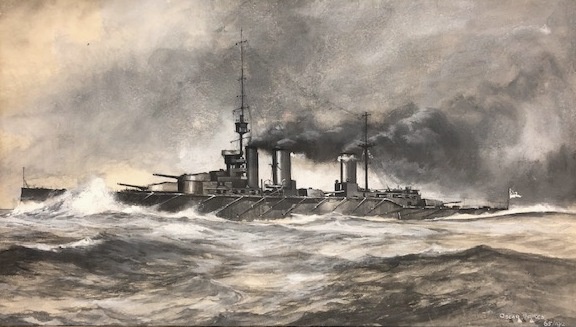 Oscar Parkes, for many years editor of Jane's Fighting Ships, shows us here HMS LION (Captain A A M Duff RN), lead ship of a new class of armoured cruiser - for so battle cruisers were first called - and the painting is dated very precisely by Dr Parkes as 6th May 1912. As originally completed only 5 months earlier, LION, as lead ship of the class, ran extensive first of class trials and to no one’s great surprise it seems, her funnel and foremast arrangement (foremast ahead of the for'rard funnel) caused impossible problems for the control top on the foremast which sat immediatley above the funnel.  Not only were its inhabitants smoked out but at any sort of speed they were cooked as well by that for'rard funnel lying ahead of the foremast. Although this was a problem that had been well documented in DREADNOUGHT and the Orion Class dreadnoughts of earlier years it remained an issue that required urgent attention and their Lordships of the Admiralty determined to fix it for LION and her sister PRINCESS ROYAL (QUEEN MARY, 3rd and last ship of the class would be completed with the problem already ironed out). And so LION was taken in hand by her builders (Devonport Dockyard) and in some unusually speedy work the for'rard funnel was moved aft, the bridge was enlarged and moved aft too and a new foremast was stepped between bridge and funnel:  a considerable amount of complicated work to be achieved in such a short time.  At a stroke the control top was no longer smoked and cooked out - except in a strong following wind! All this re-arrangement of the furniture had significantly altered the ships’ appearance by the time she resumed sea trials in late spring 1912.  With the artist dating his painting 6 May it is safe to assume that this is the battle cruiser running her post modification trials with the foremast now clearly ahead of the funnel: Parkes has ensured that he has shown the belching smoke no longer worrying those inhabitants of the control tower!  Interestingly LION had not yet formally commissioned yet Parkes shows her wearing a white ensign whereas since post-war days the blue or red ensign has been the rule.  With the dockyard's work considered successful the commissioning came some 4 weeks later and on 4th June 1912 HMS LION was formally commissioned at Devonport,, becoming flagship of the 1st Cruiser Squadron.  Rear Admiral Lewis Bayly CVO hoisted his flag in LION two weeks later, the first of several admirals who between them ensured that the battle cruiser thereafter was never to be a private ship but always a flagship.