HMS NEW ZEALAND and HMS AUSTRALIA coming to anchor, Firth of Forth

W L Wyllie (1851-1931). Watercolour signed (LL); undated. Annotated with the ships' names by the artist (just visible across the bottom). Provenance: from the collection of Admiral of the Fleet Prince Louis of Battenberg and thence by descent to Lord Ivar Mountbatten. 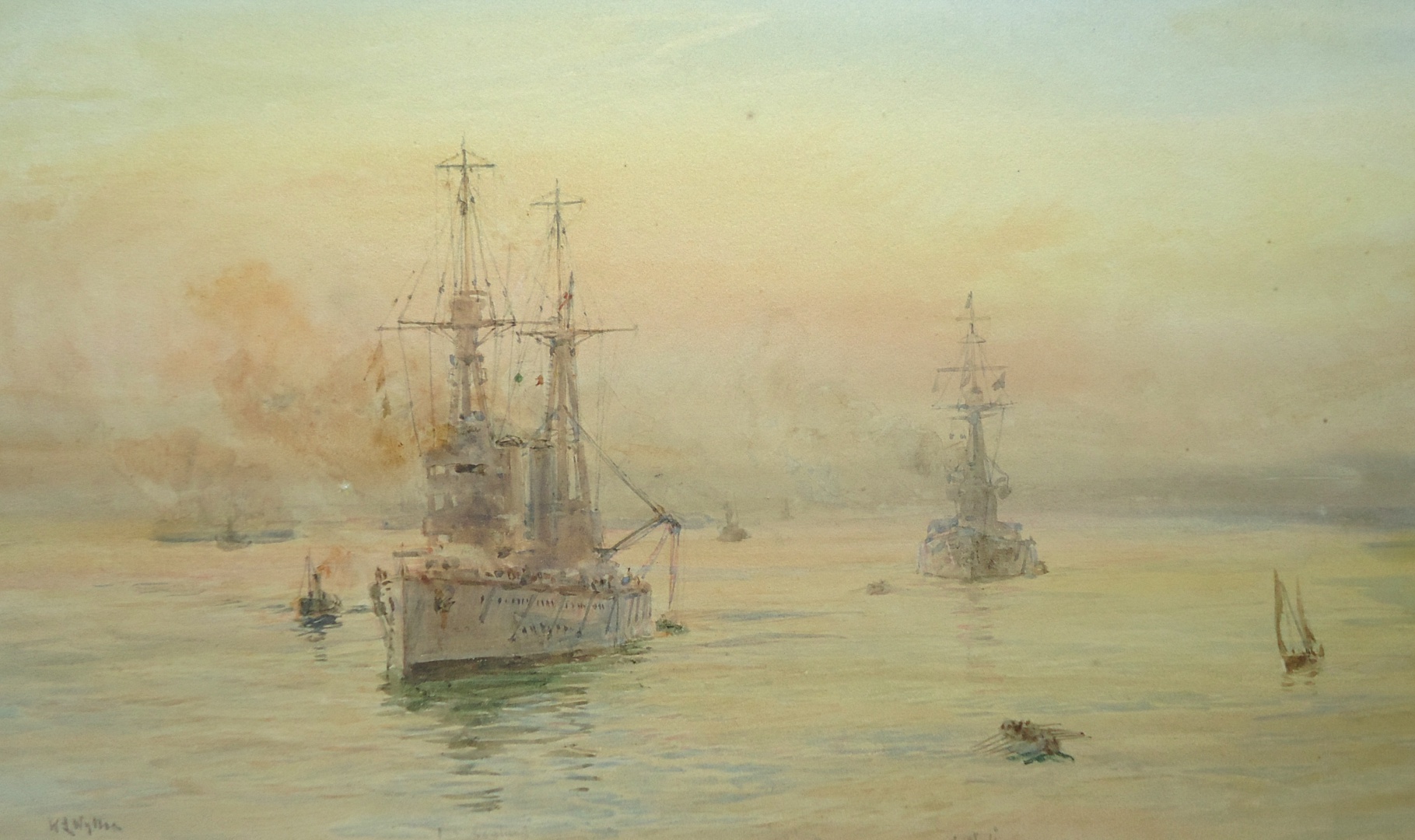 This painting together with a further eight WL Wyllie watercolours of World War 1 scenes of “affairs at sea” was originally purchased in 1917/18 by Admiral of the Fleet Lord Louis Mountbatten, 1st Marquess of Milford Haven (1854-1922), formerly styled Prince Louis of Battenberg, and Great Britain's First Sea Lord 1912-1914. It is thought likely that they were bought directly from Mr Wyllie, if not commissioned by the old admiral himself, and they have been in the Mountbatten family ever since. They were recently sold by Lord Ivar Mountbatten.

On the reverse of the watercolour's backing board is the inevitable Admiralty censor's stamp.  Applied some 3 months after the battle of Jutland it's dated 7/9/1916 and the watercolour is certified as "Passed" by the Chief Censor, Admiralty who has initialled the stamp "Passed". "Stopped" and "As Cut"- the alternatives on the rubber stamp - are deleted by the censor, probably because  Wyllie has done what has been seen before with some of his naval watercolours of this wartime period - he has made an attempt to delete the names with which he originally annotated his paintings.  But it's just possible to make out below the images of the two ships themselves the names NEW ZEALAND (to the left) and AUSTRALIA (to the right): we can see a slight shine where WLW's rubber has been at work but despite the censor's approval, enough of the writing remains!    The watercolour is undated and so we cannot be sure of Commanding Officers’ names.

Whilst studying the watercolour in close detail it's also possible to see that WLW has added NEW ZEALAND's halyards, stays and the caging to her 2nd and 3rd funnels in pencil.  The painting - entitled "Returning Home" - appears to show that period following the roar and clatter and clouds of rust that accompany the rush of the cable as it roars out when a heavy ship anchors. On the compass platform the captain is pressurising the navigating officer to confirm that he has anchored in the precise position ordered; the navigator is wisely delaying an answer as he checks and re-checks his bearings!  The fo'c'sle officer is similarly being growled at by the bridge "How does the cable grow?" and is responding with "Cable grows short stay, green two zero, Sir" as he leans over the side and gives his communications number a running commentary on the bearing and angle of the cable.  Meanwhile the Commander, with a ship's routine to run and other ships in company to be taken into account too, is keen to start getting his boats into the water and ladders down too as the captain - once he's heard from his navigator that NZ's starboard anchor  is indeed in precisely the ordered spot, and from the fo'c'sle officer that the ship "has her cable" - will be down to the quarterdeck in no time. Wearing his best Reefer jacket he will be expecting the Commander and side party to be ready at the head of the ladder and his barge to be lying at the foot of it, salt from the recent sea time cleaned off, brasswork shining, fully crewed, engines running, best seat covers fitted to take him across to AUSTRALIA for a call on the admiral...