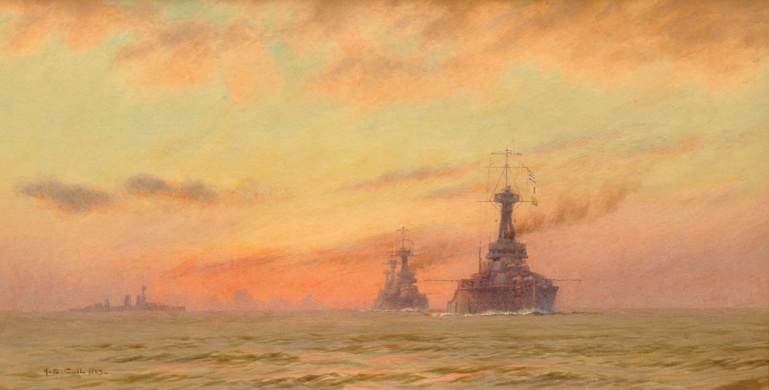 The dreadnought battleship HMS ORION and the 2nd Battle Squadron (HMS MONARCH, HMS THUNDERER and HMS CONQUEROR) are painted here in line astern in the sunset of their days:  on the horizon a dreadnought of the King George V Class is outlined in front of the vivid sunset.  The artist has to be Alma Claude Burlton Cull!

On a Brook Street Art Gallery exhibitor's label attached to the back of the frame, exhibit no 43 is formally entitled "HMS ORION and 2nd Battle Squadron by A B Cull" and although the painting is signed and dated 1923, Cull's title, "2nd Battle Squadron" enables us to place  the date of the event painted more precisely for the Orions transferred from the 2nd to the 3rd Battle Squadron in May 1919.  The appearance of ORION with heavy bridgeworks, an armoured rangefinder on the foretop and the suggestion of  a flying off platform and runway along the chase of B turret's port gun barrel (though not repeated, it seems, by Cull on the starboard barrel however) leads us towards post mid 1917 by which date these modifications were complete.   So we arrive at a window of about 2 short years, mid 1917-May 1919 which suggests that this watercolour was painted, 1923,  some 4 years after the scene depicted, when in fact all the ships except THUNDERER had been retired from service and sent to be broken up.  Rear Admiral Arthur Leveson CB, Rear Admiral 2nd Battle Squadron, had struck his flag in ORION in December 1916 and was relieved by Rear Admiral William Goodenough CB MVO -  and so it's probably 'Old Bill' Goodenough's flag that we see here fluttering at ORION's fore.

The squadron was renamed 3rd Battle Squadron in May 1919 and although the ships remained in service for a further year or so, severe post-war manning cuts and then the Washington Treaty armament restrictions combined to spell their end and all except THUNDERER had passed out of service by 1922. THUNDERER went on for some 4 years further acting as a seagoing  engineer training ship for cadets; but she too had reached the end of the road by 1926.  Determined not to go quietly when being towed to the breakers in a winter storm she made a bid to escape and ran aground.  Tugs finally got control of her again and there were red faces all round - but WARSPITE, AJAX and VANGUARD, amongst others, were to take a leaf out of her book in later years when they too made a run for it and embarassed their executioners !

Cull is considered by many to be second only to Wyllie as a 20th century marine artist of outstanding ability.  He received Royal patronage from a relatively early age: King Edward VII and King George V admired his work and several of his watercolours were acquired for the Royal Collection and subsequently found their way onboard the Royal Yacht VICTORIA & ALBERT: when she was taken out of service they went to the new BRITANNIA who already had a couple that had first been hung in the wardroom many decades ago.  As well as the Royal Collection which holds around half a dozen Culls, the National Maritime Museum owns three of his oil paintings and some seventy watercolours.