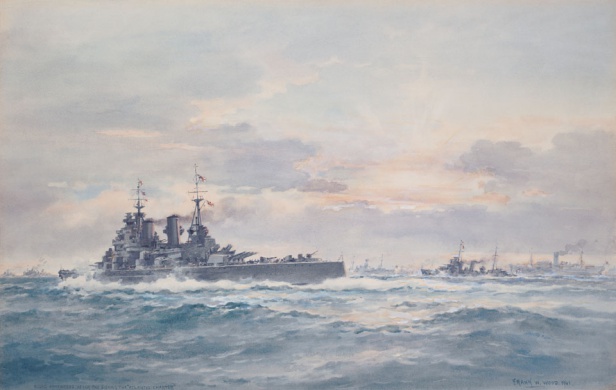 This fine, large watercolour gives us a glimpse of how HMS PRINCE OF WALES (Captain J C Leach MVO RN) would have appeared on 18 August 1941 when south east of Greenland as she sped eastwards through a convoy on conclusion of the Atlantic Charter Conference in Placentia Bay, Newfoundland.

For Churchill’s first summit meeting with President Roosevelt in the summer of 1941 a capital ship was needed as not only was his entourage voluminous but included the 3 Service Chiefs of Staff and many other top flight military and government officials: it was unthinkable that they should not travel in the greatest possible safety and secrecy. Their Lordships of the Admiralty had therefore selected the newly commissioned battleship HMS PRINCE OF WALES of the Home Fleet: she had recently been in action during BISMARCK’s breakout some 10 weeks earlier, an action for which Captain Leach’s award of the DSO would be gazetted in October. She was capacious enough to accommodate the Prime Minister’s entourage and was fast enough and well enough armed to provide the necessary protection should the enemy be unable to resist the temptation to go for such an enticing prize.

And so it was that on Monday 4th August 1941 the Prime Minister and his advisers and staffs boarded the destroyer HMS ORIBI (Lt Cdr J E H McBeath DSO RN) and an escort of 2 Hunt Class destroyers at Scrabster on the NE coast of mainland Scotland, for the passage across the Pentland Firth to Scapa Flow where PRINCE OF WALES and her Atlantic escorts, HARVESTER, HAVELOCK and HESPERUS, were anchored. The prominent author Henry Morton, invited for the Atlantic voyage by the Minister of Information, Brendan Bracken, describes the scene: “We saw a giant among giants, the splendid ship that was to be our home, her great guns pointing fore and aft, her crew drawn up on deck. How beautiful she looked that morning as she appeared out of the mist, full of power, strength and pride..... he [Churchill] crossed the gangway from ship to ship and as his foot touched the quarterdeck he saluted and then shook hands with Captain Leach,  a tall elegant figure with a telescope tucked beneath his arm...” Only a handful onboard the battleship had known the precise identity of their principal passenger.

PRINCE OF WALES and her escorts duly weighed and steaming westwards to the Newfoundland rendezvous hit increasingly heavy weather: the need to press on through the rising sea had meant that the destroyers eventually had to drop back. It also caused WSC to decide to vacate the Captain’s noisy day cabin over the 4 thundering screws and help himself to the admiral’s cabin up forrard where it was quieter with less vibration! Meanwhile President Roosevelt was also on his way: his security too was an issue attracting the very greatest importance. He left Washington, D.C. on 3rd August for the Submarine Base at New London, Connecticut, where he embarked with his party on board the Presidential yacht, POTOMAC, and then, with Presidential Standard hoisted, sailed for Appogansett Bay for “a cruise”. A little before midnight on 4th August POTOMAC anchored in Menemsha Bight, Vineyard Sound, Massachusetts, joining the heavy cruiser USS AUGUSTA (Captain C H Wright USN) who was already lying at anchor. She was flying the flag of the C-in-C US Atlantic Fleet, Admiral Ernest J King USN. USS TUSCALOOSA and five destroyers lay nearby and early the next morning the President and his party transferred to AUGUSTA: for reasons of security, however, the President's flag was not broken out in the cruiser but remained in the yacht whilst she, accompanied by USS CALYPSO, transited the Cape Cod Canal to New England waters. A Secret Serviceman, approximating the President in size and affecting his mannerisms when visible from a distance, impersonated the President and press releases issued daily from POTOMAC led all who read them to believe that FDR was embarked in his yacht on a pleasure cruise. Meanwhile, AUGUSTA and TUSCALOOSA and their screening destroyers, headed north and east for Placentia Bay, Newfoundland and anchored to await the British Prime Minister’s arrival. With her West Atlantic escorts, HM Canadian Ships RIPLEY, RESTIOUCHE and ASSINIBOINE, PRINCE OF WALES duly came to anchor there on 9th August and after three days of intensive discussions and meetings between the two leaders and their staffs – from which emerged the Atlantic Charter – formal and social farewells having been made, PRINCE OF WALES shortened in and then weighed anchor. Passing close down AUGUSTA’s side as the great warships’ respective bands rendered “God Save the King” and “The Star Spangled Banner”, Prime Minister took leave of President and with escorts now formed on his ship, Captain Leach turned for the open sea and the passage home to the UK.

This painting – entitled by Wood “Bound Homewards”- almost certainly shows the occasion when, on Friday 15th August, Captain Leach was leaned on by the Prime Minister to take his squadron through the lines of an eastbound merchant convoy also bound for the UK. The battleship and her escorts doing 22 knots soon overtook the convoy at its stately 7 knots and with an exuberant Churchill on the bridge wing, cigar to the fore and waving like old Father Neptune himself, is flying some flags of interest! Apart from her British man-of-war’s white ensign, the artist has hinted at the Union Jack on a starboard fore yardarm - as was the entitlement of the First Sea Lord, Admiral Sir Dudley Pound, who was a key player in Newfoundland talks - and at the fore truck is the flag of Vice Admiral A T B Curteis CB, Vice Admiral Commanding 2nd Battle Squadron and Second-in-Command Home Fleet. It would also appear that Frank Wood has suggested the Elder Brother’s flag of Trinity House flying from the gaff, a flag that the Prime Minister (for long an Elder Brother) would have enjoyed wearing, as indeed he did Trinity House’s distinctive yachting suit and cap in which he had appeared many times on this voyage. Escorting the battleship in this scene with her precious cargo of VIPs are the destroyers HMS ESCAPADE, TARTAR, PUNJABI, ECLIPSE and Churchill’s old friend from Scapa, ORIBI. But there’s nothing like a sustained speed of 22 knots to eat up a destroyer’s fuel and so early next morning the squadron came to anchor in Hvalfjord, Iceland where it remained fuelling and to allow Mr Churchill to carry out official functions ashore. During the last dog watch the ships shortened in and with the Prime Minister now back onboard the battleship and looking forward to a wardroom film night, the squadron weighed and started out on the final leg of the journey to Scapa.

Within 4 months HMS PRINCE OF WALES lay at the bottom of the South China Sea, victim, together with HMS REPULSE, of one of the Atlantic Charter’s most unsatisfactory aspects, “The Japanese question”, over which US/UK positions were never fully explored , never really settled.