HMS QUEEN ELIZABETH IN THE MEDITERRANEAN, 1925 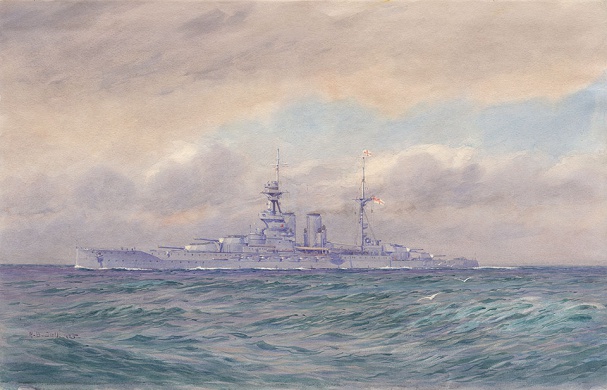 Dated 1925 by Cull, there is no reason to believe that this painting of the ship was not actually executed at this time: QUEEN ELIZABETH is still in her original state with twin funnels, she is clearly a full admiral’s flagship and was, in 1925, in the Mediterranean which Cull’s painting with waist awnings and short, strong shadows, would support.

Admiral Sir Osmond de B Brock KCB KCMG KCVO was a Guernseyman and spent the entire Great War at sea in battle cruisers where the action was thickest. He was promoted full admiral in 1922 when he assumed the appointment of C-in-C Mediterranean where he flew his flag for 3 years, first briefly in IRON DUKE, and then in QE. From the Med he went to be C-in-C Portsmouth. Promoted to Admiral of the Fleet in 1929 he died in 1947. His flag captain in QUEEN ELIZABETH was Captain F F Rose and The Med Fleet Gunnery Officer was Commander Bruce Fraser, who as C-in-C Home Fleet with his flag in DUKE OF YORK, was to cripple and then sink the German battle cruiser SCHARNHORST off North Cape in the Barents Sea, on Boxing Day 1943.

In 1925 there were four ships in the 1st Battle Squadron, QE, VALIANT, BARHAM and MALAYA, WARSPITE having paid off for a major refit would which would see her emerge with her twin funnels trunked into one large one, a refit which all the class would undergo too in the ensuing years. A decade later a further major refit would see three of them virtually rebuilt, this time with modernised main and secondary armament and control systems, streamlined bridges and superstructures, rebuilt boiler rooms, and hangars for aircraft. The entire class was very heavily worked during WW2 and with the exception of BARHAM (torpedoed in November 1941) all survived the war to be scrapped in the years immediately following.