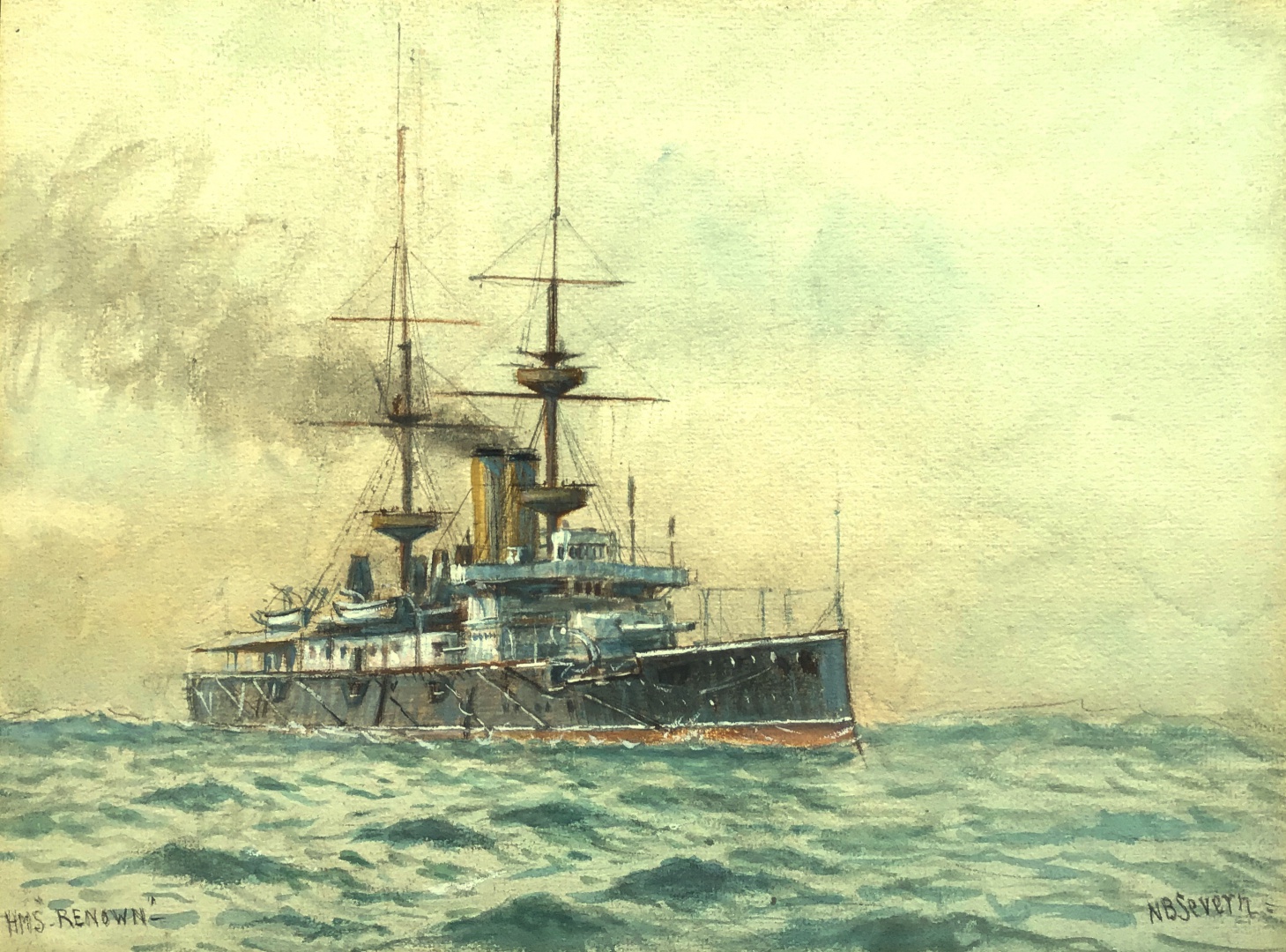 HMS RENOWN, launched in 1895 and first commissioned two years later was, we read many times,  Admiral Jacky Fisher’s favourite flagship.  In the last decade of the nineteenth century when Fisher was Commander-in-Chief North America and West Indies Station with a battleship, eight cruisers,  three sloops and a destroyer under his command, RENOWN wore his flag.  “She was small, fast and elegant…” and as well as her employment on operational tasking – the Station covered a huge sea area from Canada in the north to Trinidad in the south – many was the party that the admiral threw on her quarterdeck and dinner party in his day cabin: he loved his RENOWN it seems.

When he was promoted full admiral and appointed Commander-in –Chief Mediterranean Fleet, he insisted that RENOWN again carried his flag and she took pride of place in the capital ship moorings in Grand Harbour, Malta. Once again, as flagship, she was the centre of attention as she lay there, aft top gallant mast heightened to better show the huge cross of St George – the flag of a full admiral in the Royal Navy – her topsides gleaming, brass work burnished to within an inch of its life, her awnings snowy white, impeccable white ensign and bunting curling lazily.  His barge was immaculate with its fancy knots and tiddly rope work and was said to be the envy of both His Majesty King Edward VII and the Emperor of Germany who were both believed to covet it!  But it wasn’t all dances and dinner parties for this was Admiral Sir John Fisher, the great reformer of the Royal Navy who was always on the go as he took his fleet hither and thither in fair weather and foul, as he wrestled with his inventive ideas.  Fortunately RENOWN was also a good sea boat as the Mediterranean, of course, can brew up as good a storm in the winter months as anywhere!  Fisher appeared to relish rough weather and foul conditions too as they was all part of the navy’s lot and new tactics and equipment had to be functional in all weathers.

It all came to an end on 4 June 1902, the day he hauled down his flag in the Mediterranean and headed for home to take up his new appointment as Second Sea Lord.   With much pomp and ceremony RENOWN headed down Grand Harbour and out to sea and carried the admiral to Genoa where he disembarked for London.  RENOWN herself was finally taken out of service in 1914.

N B Severn is a noted marine artist who flourished as an etcher and painter in watercolours around the turn of the 19th and 20th centuries.  He is recognised as an artist who knew his ships and portrayed them with commendable accuracy.