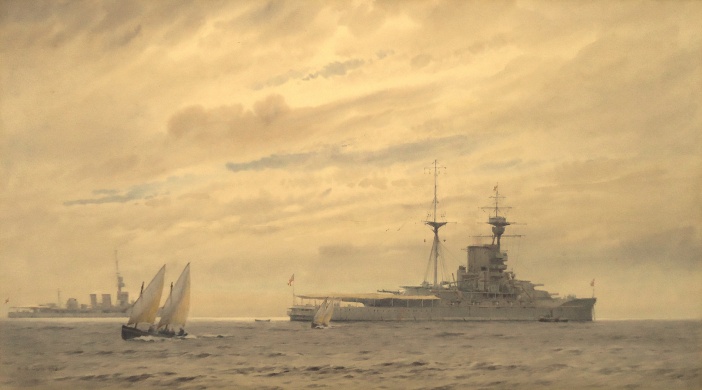 Flagship of the Atlantic Fleet when this watercolour was dated, 1928, HMS REVENGE (Captain D B N North CSI CVO RN) makes an imposing sight as she lies to her port anchor.  At the fore flutters the St George Cross of a full admiral, in this case no less than the Commander-in-Chief Atlantic Fleet, Admiral The Hon Sir Hubert Brand KCB KCMG KCVO.  A whaler race is clearly in progress and in the background (as always when playing second fiddle to a flagship!) is a C Class light cruiser with a 'trawler' bow, the hallmark of the Carlisle sub group.

We are looking at a fleet flagship in an unusually relaxed state for such a Big Swell of a battleship! Although there is a picket boat on the forrard  boom she doesn't appear to have steam up or be manned by her Snottie and his crew so is probably not required in the immediate future; the after ladder also doesn't appear to be manned by a  side party awaiting the imminent departure or arrival of their admiral: hands are relaxing on the fo'c'sle and even down aft too, officers appear to be enjoying a fresh air stroll without the ususal pomp and ceremony that is part and parcel of a flagship's quartedeck, preventing their welcome peace and quiet.  Perhaps the admiral is the solitary figure aft on the quarterdeck (just to the left of the whaler's foresail), or perhaps he is ashore and the lone figure is Captain Dudley North (who was to be outrageously sacked by Churchill a decade later for allowing the "escape" of the French fleet when he, North, was Flag Officer Gibraltar) enjoying a bit of peace in his own ship before the C-in-C returns?  A skiff popples happily on a line astern of the admiral's sternwalk - the ship is going nowhere in a hurry either it seems.....  The mice are definitely playing whilst the cat is away!