HMS REVENGE Coming out of a Squall 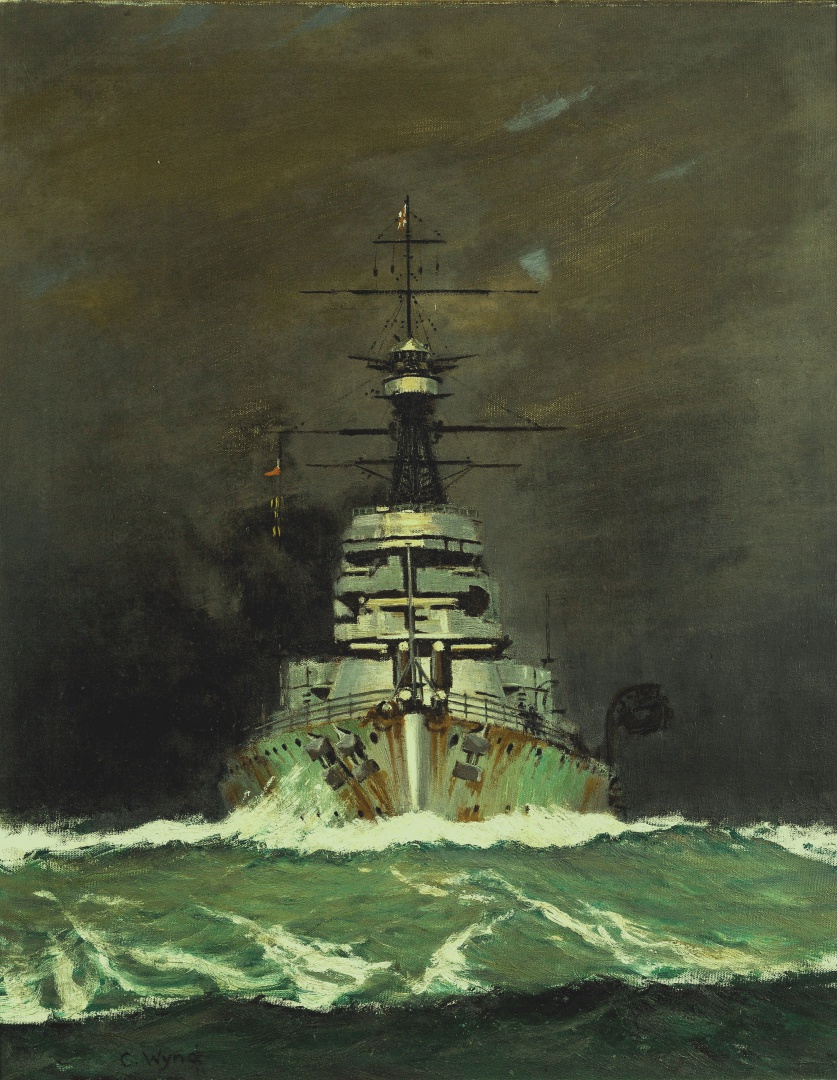 This magnificent bow view of HMS REVENGE gives some idea of just how massive and seemingly impregnable these leviathans were. Not that REVENGE and her sisters (HMS ROYAL OAK, RAMILLIES, REVENGE, and ROYAL SOVEREIGN) were by any means the biggest of the Royal Navy's battleships of their time, for at 28,000 tons displacement and 624 feet long, they were slightly smaller than the Queen Elizabeths who preceeded them, and much smaller than the Nelsons, King George Vs and HMS VANGUARD who followed them.

They were a good couple of knots slower than the QEs too. Together with ROYAL OAK these were the only ships of the class completed in time for the Battle of Jutland, and there is a salty story (to do with the ghostly rattle of Sir Francis Drake's drums clearly being heard onboard REVENGE at the height of the battle) about the battleship (the 9th of the name in the Royal Navy) which survives to this day ...... Having fought at Jutland and been worked hard throughout the Great War, by 1924 from when this picture dates, the battleship was part of the British Mediterranean Fleet based in Malta: she was commanded by Captain Gilbert Stephenson. She is flying from the fore the flag of Rear Admiral 1st Battle Squadron, Rear Admiral W A H Kelly CB CMG MVO a hugely charismatic officer who went on to become one of the 'Fabulous Admirals' of the interwar years. Well over 6 feet tall, of magnificent appearance and larger than life in every respect he was seen by many as a potential First Sea Lord. But a combination of his overbearing nature, a healthy disregard for authority, a withering tongue and a refreshing impetuosity and schoolboyish sense of fun saw him finish his career as Commander-in-Chief  China Station though their Lordships showed good sense by recalling him for service in the Second World War when his experience and reputation came in extremely handy.

This oil painting is not, of course, the well known one painted by Charles Pears and that hangs in the Naval Club in Mayfair, London. It's a very fine oil on canvas in its own right and is based closely on Pears' painting.  Unlike the latter, Wynd has subtly achieved some extra contrast by including in the foreground a patch of dark, shadowed sea, all part of that dramatic lighting which is often associated with squally Mediterranean weather, the squall from which the battleship is emerging.