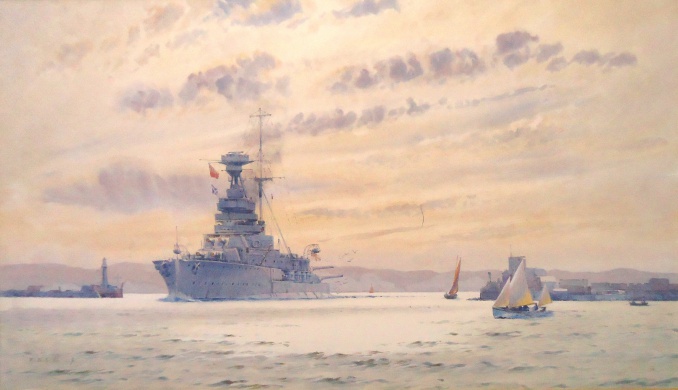 Could only be Alma Cull!  Classically delicate sea and sky with the Dorset coastline in the background as the battleship HMS ROYAL SOVEREIGN  (Captain W M James RN) comes through one of the breakwater entrances and into the great naval anchorage and base of Portland.  A Montagu whaler is creaming along to port of the battleship and tucked in against the breakwater astern of her is a small boat pottering around doing a bit of fishing.  The battleship's wash - even at the King's Harbourmaster's restriction of 5 knots - will roll them around.  A lot!

HMS ROYAL SOVEREIGN was first commissioned in 1916 and after a busy war with the Grand Fleet she was part of the mainstay - albeit in the second eleven - of the Royal Navy's battleship force  in the interwar years when she served both in the Mediterranean and Atlantic Fleets. The outbreak of war in 1939 saw her busy again (eight 15 inch guns were very useful!) and in 1944 she was part of an arrangement between Britain and Russia which led to her transfer, together with 4 submarines, to the latter's navy.  She was returned to the Royal Navy in 1949, placed in the Reserve Fleet briefly and then de-equipped  and scrapped shortly afterwards: she had had a long and honourable career spanning over 30 years.

Although this watercolour has been dated 1928 by the artist, research suggests that the event painted pre-dates this slightly as by 1928 ROYAL SOVEREIGN was sitting in refit in dockyard hands primarily to allow her range finders and searchlight batteries to be modernised and enhanced.  Her captain, "Bubbles" James, had departed too and the ship was in the hands of the Executive Officer during the period of the short refit before a new commanding officer, a four ringer,  joined.

William James was dogged by the nickname "Bubbles" throughout his life (even when, we are told, he was an impressive, fierce sounding full admiral with a shock of distinguishing white hair and the insignia of a Knight Grand Cross of the Most Noble Order of the Bath on his uniform jacket!)  because of an event in his early childhood.  The grandson of the artist Millais, he sat several times for his doting grandfather and one of the canvases that resulted showed young William staring, entranced, at some bubbles he had just blown.  The detergent company Pears ("Apples make cider, Pears make soap" was their slick jingle) seized upon the image and used it widely in their advertising posters: "Bubbles" as a nickname stuck firmly, of course, for the next 80 or so years. How his ships' companies must have enjoyed this  - though it would have taken a brave Snotty or Bluejacket even to think it!