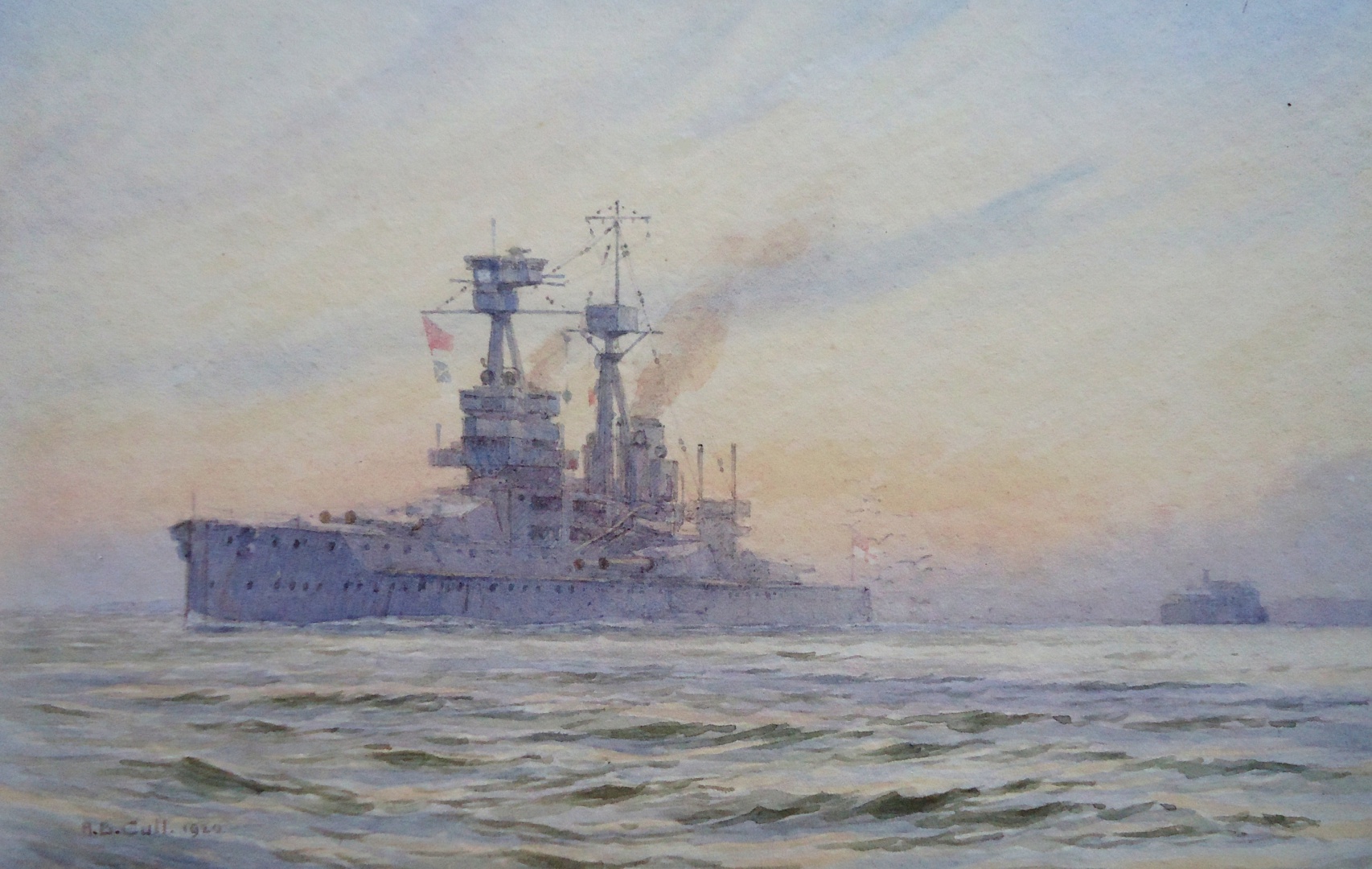 It is very evident that Alma Cull had a strong link with, a fondness for, His Majesty's Ship TEMERAIRE: she certainly seemed his preferred ship of the Bellerophon class when it came to painting! There are two other Cull watercolours of TEMERAIRE on this website, this is one makes a third and the National Maritime Museum has a sad Cull watercolour dated 1922 of a very forlorn and bedraggled looking TEMERAIRE lying at anchor, riding high in the water with all magazines and victualling stores and much of her equipment removed as she awaits the tugs to take her to a rendezvous with the breaker's torch.

The artist has dated this painting 1920 and he shows the battleship in her final state before she was de-commissioned some 12 months afterwards.  The Great War had brought about many modifications to the three ships of the class, TEMERAIRE, SUPERB and BELLEROPHON: top masts had been cut down, control tops enlarged, searchlight towers added and enhanced, and additional bridge  superstructure and sponsons built up (indeed you only have to see MP080 on this website of TEMERAIRE in 1912 and the scale of the build up of superstructure and reduction of top masts is very evident).  Commissioned in May 1912, TEMERAIRE  and her 12 inch gun sisters had been in the line at Jutland and most of the other major skirmishes of the war too and had spent a huge amount of time out at sea patrolling, watching, waiting in weather that was often worse than foul, just waiting for the opposition to show up.  Scapa Flow in the windswept Orkneys was their base and quite often conditions in there were little better than out at sea with ferocious winds requiring the ships to have steam up just to hold their anchors and avoid dragging.  This in turn required steaming watches to be closed up down below in boiler and engine rooms as well as bridge watchkeepers and a focsle party to be available instantly to veer more cable or let go a second anchor.  If dragging was clearly happening, anchor had to be weighed and the ship would get underway and try and find an anchor berth with better holding. All this very often in the pitch dark of an Orkney night, with driving rain, sleet or snow and an anchorage crammed full of blacked out warships, all of whom had to be avoided of course.... No radar in those days! There was little rest for anyone.

By the time of this painting TEMERAIRE and her sisters of the Bellerophon and St Vincent classes had been relegated to the second, if not third, eleven: they were obsolete and  worn out, the years of demanding war service with inadequate time allowed for maintenance making them old beyond their years.  But in October 1918 as the High Seas Fleet was collapsing and the threat from across the North Sea reducing commensurately, she went out to join the Eastern Mediterranean Squadron and with her sister SUPERB (flagship of Vice Admiral Gough-Calthorpe) was present in Constantinople for the armistice negotations with Turkey. Returned to British waters in 1919 she re-commissioned under Captain L A B Donaldson CMG RN as a cadet and gunnery training ship and she was kept busy in this role for two more years before the Washington Naval Treaty and massive naval cuts following the end of the war inevitably led to the older classes of capital ships being paid off.  TEMERAIRE was scrapped in 1922.