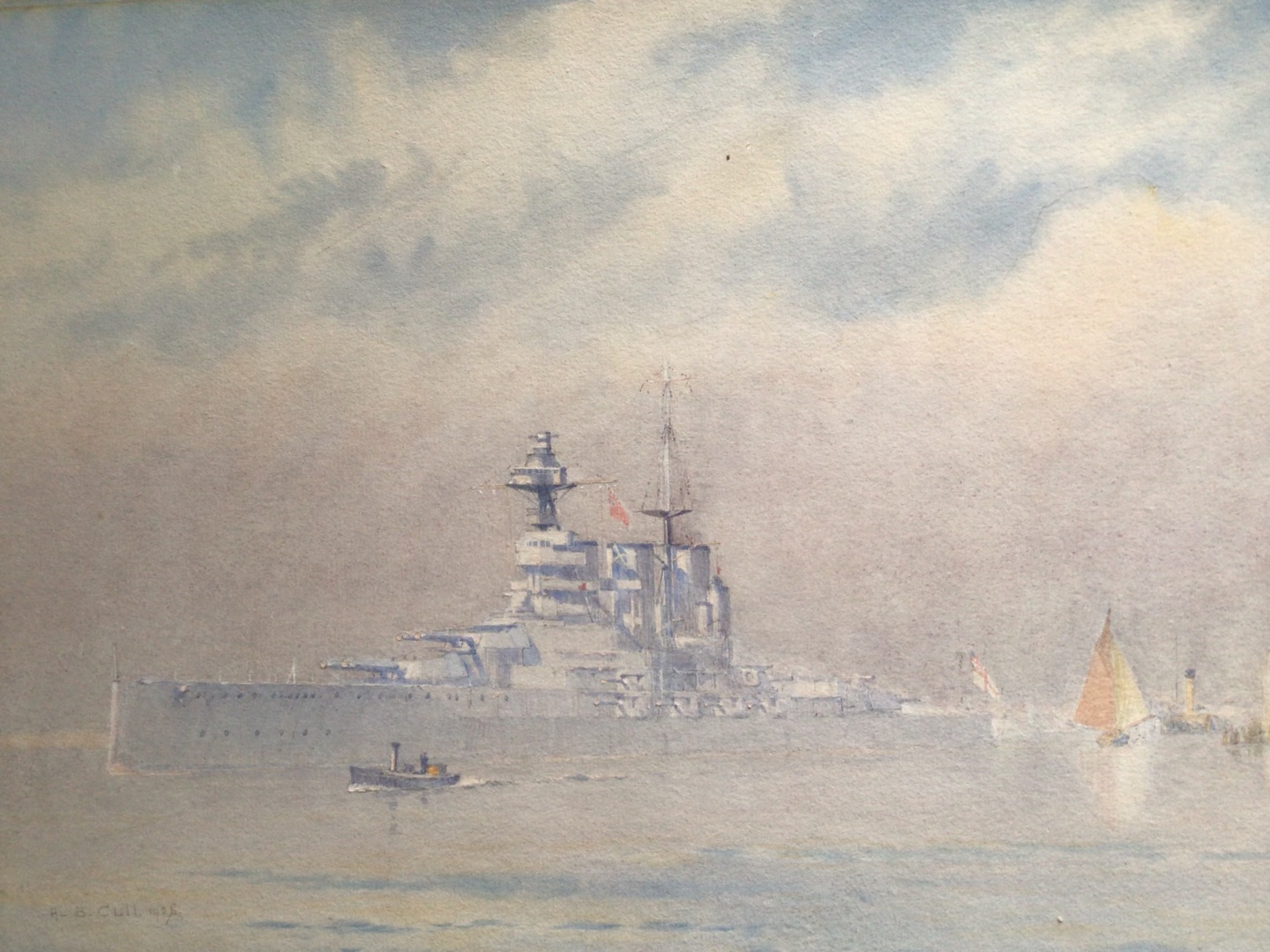 For those who know the eastern Solent in early summer this is familiar weather: a thick early morning fog is starting to burn off leaving lingering whisps of mist which then evaporate and lead to a glorious sunny day.  Cull has captured the scene superbly with an exquisitely delicate lightness of brush work as he shows the great battle cruiser cautiously ghosting her way out of Portsmouth naval base.

Cull has dated his painting 1928 and in command of HMS TIGER then was Captain Walter Lake CB RN. In the autumn of that year he retired from the Service and was relieved by Captain Kenneth Dewar CBE who had been in command of the battleship HMS ROYAL OAK in the Mediterranean Fleet when he had become involved in what became known as the Royal Oak courts martial......

This beautiful battle cruiser who joined the Grand Fleet on 6th November 1914 having been rushed to completion by her builders on the Clyde, John Brown, was the last of the Royal Navy’s pre-war battle cruisers and was also regarded by those in the fleet as the best.  Captain Henry Pelly, her first captain, was under considerable pressure from the Commander-in-Chief to get his new ship shaken down and worked up as quickly as possible so that she could take her place in the line and its certainly true that TIGER had her fair share of mishaps during her first few rushed months at sea with the Grand Fleet. At the Battle of Dogger Bank she was hit heavily on B turret and the bridge structure and had 10 killed; and at Jutland she took 21 hits with 24 killed and 37 wounded but she was back in service and ready for sea again within a month of returning from the battle, proof of a solid ship stoutly built. With an overall length of some 700 feet and a full load displacement of 28, 500 tons she was coal and oil fired, her 39 boilers producing some 108,000 shaft horsepower which gave her an impressive speed of 29 knots plus when at full chat - and an appetite for coal of over 1,500 tons per 24 hours when steaming hard!

Like all other capital ships during the Great War she was heavily worked and when a form of peace finally came to Europe she was taken in hand for a refit during which she was fitted with a mainmast.  Some thought this spoilt her appearance whilst others argued it made her appear more symmetrical.  She spent much of the 1920s in a training role or in high readiness Reserve and her chance came to return to full commission in 1928 when she replaced her fellow battle cruiser HMS HOOD  who was required to enter dockyard hands for a refit: the Battle Cruiser Squadron thus consisted of RENOWN, REPULSE and TIGER.  But the Washington Treaty finally did for her and when HOOD re-commissioned old TIGER finally paid off  for the last time. Rear Admiral Dudley Pound (Rear Admiral Commanding the Battle Cruiser Squadron (ACQ)), shifted his flag from RENOWN to TIGER as she entered Plymouth for the last time on 30 March 1931 to pay off for disposal, a gesture of respect to the veteran battle cruiser that we are told was deeply appreciated by the TIGERs as never in her short life of some eighteen years had she been a flagship.