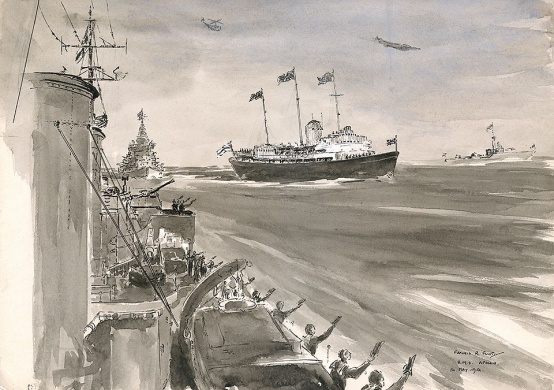 A set of three (only one illustrated) monochrome sketches: this one is the scene from HMS APOLLO looking aft with the Royal Yacht (right) and VANGUARD (astern); the others show (1) Seahawks and RAF Shackletons of Coastal Command overflying HMY BRITANNIA with HMS GLASGOW close to port and HMS SAINTES crossing astern; and (2) Gay Class coastal forces roaring in whilst HMS VANGUARD is in station astern of HMY.   All three are signed, some are inscribed on both front and/or back.  A fourth picture of the event  - a watercolour also by Flint - is available too (see under Maritime Originals, 'The Royal Yacht BRITANNIA').

At 1700 precisely the destroyers & frigates of the Royal Squadron turned inwards together & formed line astern of VANGUARD & APOLLO, the poor visibility making manoeuvring at speed a constant worry, especially for the Master of the Fleet on the flagship's bridge who in particular was concerned lest one of the hundreds of small craft who had come out to join in the spectacle was run down by a speeding warship racing to take up station! With upper decks manned escorts then hauled out & increasing speed to 25 knots creamed past BRITANNIA cheering ship for Her Majesty as they roared down her starboard side: HMS AGINCOURT (Capt R G Mills DSO DSC **)(Capt D4), HMS AISNE (Cdr J R G Trechman), HMS BARROSA, (Cdr T W Best), HMS CORUNNA (Cdr A P Culmer); HMS TYRIAN (Capt F H E Hopkins DSO DSC)( Capt D2), & HMS TENACIOUS (Cdr R G Gatehouse DSC**); HMS VENUS (Capt C C Martell DSC) (Capt F6), HMS VIGILANT (Cdr C E Emerson), HMS VIRAGO (Lt Cdr A G Maclean) & HMS VERULAM (Cdr E M Usherwood); OBDURATE, BROCKLESBY & APOLLO – all made a brave sight as they too sped past The Queen in a welter of spray, bow waves high, sterns tucked down low, their guard rails manned by lines of men with caps held aloft as they roared out three cheers for their Sovereign. Then it was the Commander-in-Chief's turn to take his leave of The Queen: with guard and band paraded and upper deck lined the great battleship, dwarfing BRITANNIA, steamed majestically past to give three cheers for Her Majesty. Some 60 years later it is remembered by VANGUARDs what an excitement it had been to see a shyly waving Prince Charles & Princess Anne together with their parents, on the Yacht's saluting platform. Drawing swiftly ahead then heeling impressively as she hauled round to starboard, VANGUARD then opened out to allow the new Royal Escort under the Commander-in-Chief Portsmouth, to take station on HMY for her passage through the Dover Strait and up the Thames estuary to the Pool of London.