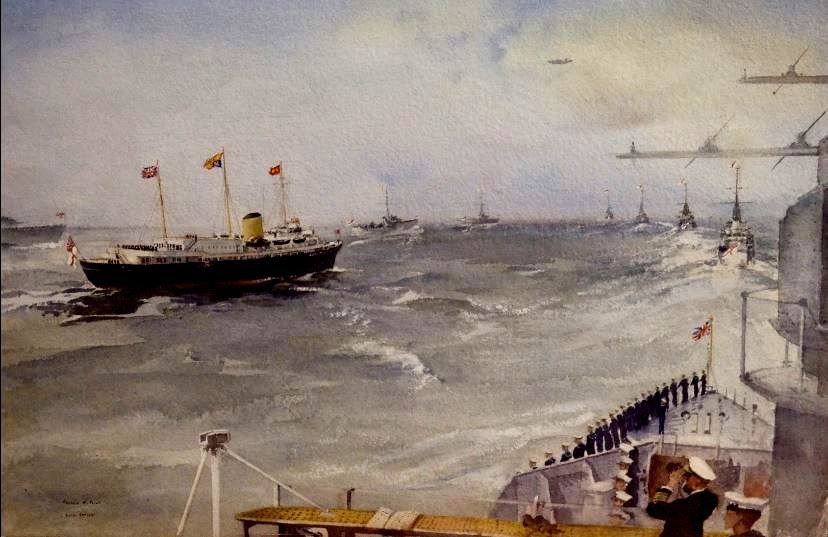 This was the final leg of the Queen's Commonwealth Tour & the Commander-in-Chief Home Fleet, Adm Sir Michael Denny KCB CBE  DSO, had sailed with some 20 of his ships to escort Her Majesty up Channel.  HM Yacht BRITANNIA (V Adm E M C Abel Smith CB CVO, Flag Officer Royal Yachts) wearing the Royal Standard & with Passage Escort from Gibraltar provided by HMS DUCHESS (Capt D G Goodwin) flying the flag of R Adm J W Cuthbert CB CBE, Flag Officer Flotillas (Home), HMS GLASGOW (Capt B W Bryant DSO** DSC), HMS SAINTES (Capt D P Dreyer DSC (Capt D3) & HMS BARFLEUR (Cdr W F Skelton), arrived off the Western Approaches and was joined from ahead by the C-in-C with his flag in the battleship HMS VANGUARD (Capt R A Ewing DSC).   Sir Michael knew he was under some pressure for the event to be better than perfect as only the week before the Commander-in-Chief Mediterranean Fleet, Admiral Lord Louis Mountbatten, had similarly paraded his fleet before the Queen south of Malta. Being the showman he was, Mountbatten had honed his ships into perfecting very close quarters manoeuvring and at breakneck speeds (generally in contravention of accepted wisdom) which would indeed be mightily impressive  - if there were no accidents with resulting embarrassing collisions.  There weren’t and it was!

At the stroke of 0900 the Home Fleet executed a series of fast, slick manoeuvres to bring into station the ships of the new Royal Escort, HMS APOLLO (Capt C P Coke DSO), HMS DECOY (Capt R H Maurice DSO DSC), HMS DIANA (Capt C R L Argles ) & ships of the 4th Destroyer Flotilla and 6th & 2nd Frigate Training Squadrons.   As a 21 gun Royal salute rolled out, VANGUARD & APOLLO closing fast from ahead turned tightly to starboard & took up station on either quarter of BRITANNIA.  Now relieved of their task the 4 destroyers, the Passage Escorts, increased speed to 25 knots & hauled out to starboard, racing past VANGUARD & then cheering ship as they took their leave of The Queen, disappearing in an extravagant flurry of bow waves, white water & tumbling washes. It's this stage of the manoeuvres that Flint has painted here with VANGUARD on the extreme left and APOLLO's bridge in the foreground.  We can see Captain Coke of APOLLO, with a signalman in attendance (lower right), looking through his glasses as he constantly checks that his Officer of the Watch has APOLLO in precise station on his Commander-in-Chief’s starboard beam (far too many admirals afloat to get this wrong, even by a whisker!)

At 1700 precisely the destroyers & frigates of the Royal Squadron turned inwards together & formed line astern of VANGUARD & APOLLO, the poor visibility making manoeuvring at speed a constant worry, especially for the Master of the Fleet on the flagship's bridge who in particular was concerned lest one of the hundreds of small craft who had come out to join in the spectacle was run down by a speeding warship racing to take up station! With upper decks manned escorts then hauled out & increasing speed to 25 knots creamed past BRITANNIA cheering ship for Her Majesty as they flashed down her starboard side: HMS AGINCOURT (Capt R G Mills DSO DSC**)(Capt D4), HMS AISNE (Cdr J R Trechman), HMS BARROSA (Cdr T W Best), HMS CORUNNA (Cdr A P Culmer); HMS TYRIAN (Capt F H E Hopkins DSO DSC)( Capt D2), & HMS TENACIOUS (Cdr R G Gatehouse DSC**); HMS VENUS (Capt C C Martell DSC) (Capt F6), HMS VIGILANT (Cdr C E Emerson), HMS VIRAGO (Lt Cdr A G Maclean) & HMS VERULAM (Cdr E M Usherwood); OBDURATE, BROCKLESBY & APOLLO – all made a brave sight as they too sped past The Queen in a welter of spray, bow waves high, sterns tucked down low, their guard rails manned by lines of men with caps held aloft as they roared out three cheers for their Sovereign.

Then it was the Commander-in-Chief's turn to take leave of his Fleet's Sovereign: with her eight fifteen inch guns trained fore and aft, Royal Marine guard and band paraded and upper deck lined the great battleship, dwarfing BRITANNIA, steamed majestically past to give three cheers for Her Majesty. Some 60 years later it is remembered by old VANGUARDs what an excitement it had been to see a shyly waving Prince Charles & Princess Anne together with their parents on the Yacht's saluting platform: and so close - only about 100 feet away.  Drawing swiftly ahead then heeling impressively as she hauled round to starboard, VANGUARD  opened out to allow the new Royal Escort under the Commander-in-Chief Portsmouth to take station on HMY for her passage through the Dover Strait and up the Thames estuary to the Pool of London where another massive reception awaited the returning Queen.

Flint's watercolour is one of many scenes he recorded that day and three of his ink sketches of the occasion were also in Maritime Originals' collection (find under BRITANNIA in the Search box).