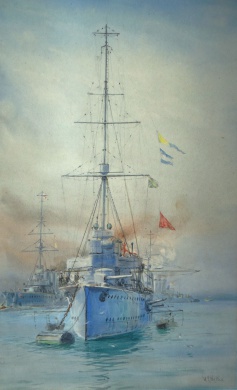 Entitled by Wyllie "These cruisers look very peaceful until a wireless call reaches them" this is one of the few Wyllie watercolours that sees the light of day in 2017 - for most are horded and stored in museums or are in private collections from where (quite understandably) they are seldom allowed to escape!  This one is in cracking condition with not a spot in sight and signs of only very slight fading even though it's some one hundred years since it was painted . It's a magnificent and relatively large watercolour portrait of the Harwich cruisers who worked so hard at sea and achieved much in the years between 1914 and 1918.

As was so often his way, WLW didn't date this painting but we are helped here by the reverse of the watercolour board which is stamped by the Chief Censor, Admiralty, and dated "15/3/1916".  Also in his blue pencil the censor has ticked the box "Passed as cut" but has qualified this with a hand written "delete names" and initialled the stamp "DB or DJ" (hard to tell).  Mr Wyllie has complied and clearly then rubbed out the offending names as the eraser 'skid mark' is just visible - but more significantly, he didn't do a thorough job and the offending names are just about discernible!  Under a bright light and with a magnifying glass one can just about make out what are pretty certainly, from left to right,  the names of ARETHUSA and UNDAUNTED - there's more writing there too but its not easily decipherable.

Thanks to WLW's wonderful draftsmanship and eye for accurate detail its not difficult to spot that these are indeed light cruisers of the Arethusa Class to which ARETHUSA gave her name and UNDAUNTED was a class member.  The cruiser on the left - ARETHUSA from the "erased" pencilled names - is here shown wearing a Commodore's broad pendant which belonged to the Commodore commanding the 5th Light Cruiser Squadron, Commodore Reginald Tyrwhitt CB RN , a naval officer who was to rise to the highest rank in the navy.  Also discernible over to the left in the painting is a submarine lying off the port bow of ARETHUSA.  The title of the watercolour suggests that all is peaceful and quiet at the anchorage until a signal arrives - and that is clearly what is depicted here.  What appears to be the fo'c'sle party can be seen closing up on UNDAUNTED, perhaps to start disconnecting the heavy anchor cable which is securing the ship to the buoy; a slip rope to the buoy is already discernible.  When the bridge wishes to get underway the cruiser will move slowly ahead and up towards the buoy until it is nearly underfoot, thus taking the weight off the sliprope which can then be hauled through so that the ship is then free to manoueuvre.  Boats lying at booms are being manned prior to being brought alongside to be hoisted although one will first be required to put a "buoy jumper" onto the buoy: he will carefully knock out the pin in the shackle by which the cable is connected and the cable will then be heaved in, the slip rope having already been passed through the buoy's ring ready for slipping.   The signal hoists on the cruiser no doubt support the fact that libertymen are being recalled, boilers are being flashed as notice for sea is shortened and everywhere are signs that the cruiser squadron is being readied for sea.  The Kelvin Hughes sounding boom - the long boom protruding from just beneath UNDAUNTED's bridge wing - is very conspicuous and is another sign that the ships will shortly be getting underway and proceeding through shoal waters before the open North Sea is gained.  WLW has painted a master of a watercolour....