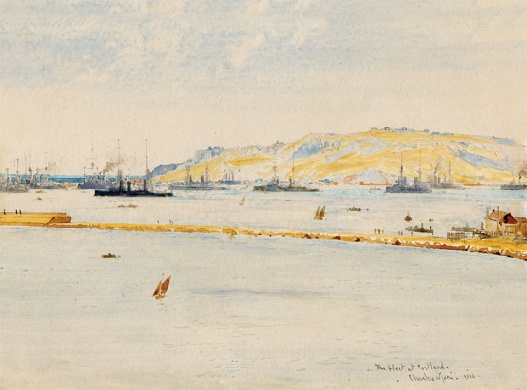 The protected anchorage at Portland  formed by Chesil Beach and the south Dorset coast mainland to the west and north, and the Isle of Portland to the south  has been a spacious base for ships of the Royal Navy for generations. King Henry VIII built Portland Castle and Sandsfoot Castle to defend the anchorage but the navy was keen to enclose it further by providing protection from the south and east; and so construction of the south breakwater arm was started in 1849, finally completing some 25 years later. The early years of the 20th century saw the rising threat of war against Germany dominate naval strategic thinking and as the Royal Navy developed the dreadnought battleship and then raced to outbuild the German fleet, Portland anchorage, strategically well placed and undoubtedly very useful was, however, considered too vulnerable to attack from the east both by enemy raiders and to the weather. Two further breakwater arms around the eastern perimeter were therefore constructed together with more forts and batteries ashore, and two small forts were also built on the seaward ends of the breakwater arms.

Two years after this painting is dated the old battleship HMS HOOD was scuttled in the southern entrance to reduce the risk of a new threat, submarine penetration , and the anchorage had now become a huge and secure harbour and indeed remains one of the largest man made harbours in the world. Whilst the harbour was not deep there was certainly water enough even for the deep draught capital ships of the first half of the 20th century and with its quick access to the Channel it was used very extensively by the fleet - as seen here in 1912. At left foreground (in shadow) is what appears to be a battle cruiser of the newly completed Lion Class and also lying at anchor in the great harbour we glimpse a further battle cruiser or two and some dreadnought battleships - including one that looks like NEPTUNE - as well as some armoured cruisers.  Steam Pinnaces are also in evidence as they run duty errands for  senior officers and provide liberty boats for those able to get ashore for an hour or so. It should be remembered that the town of Weymouth, some 4 miles by road across the causeway or a 15 minute boat ride round from Portland harbour and into Weymouth Bay, was probably in its heyday as an elegant, lively and fashionable resort with amusements aplenty to suit all pockets and tastes!

It was from Portland and Weymouth Bay that the First Fleet (shortly on the outbreak of hostilities in 1914 to be renamed the Grand Fleet) was sailed in great secrecy by the First Lord of the Admiralty, Mr Churchill, just days before World War 1 was declared. The First Sea Lord, Admiral Prince Louis of Battenberg, had personally ensured that the First Fleet was not dispersed on completion of the great naval review at Spithead some 10 days earlier for the international situation was getting more worrying by the day.  And so as Europe slid towards war Portland became the anchorage for the huge gathering of dreadnoughts (some two dozen) whilst many of the cruisers and most of the destroyer flotillas crowded out Weymouth Bay. In those final days of July 1914 - and with Churchill agitating lest the fleet be subjected to a pre-emptive attack before war was actually declared - the ships in Portland and Weymouth were sailed in secrecy for Scapa Flow under cover of darkness. In the First Lord’s dramatic words: “We may now picture this great fleet, with its flotillas and cruisers, steaming slowly out of Portland harbour, squadron by squadron, scores of gigantic castles of steel wending their way across the misty, shining sea, like giants bowed in anxious thought. We may picture them again as darkness fell, eighteen miles of warships running at high speed and in absolute blackness through the narrow Straights, bearing with them into the broad waters of the North Sea the safeguard of considerable affairs.”

The Royal Navy continued to make good use of Portland for the following 70 years or so and remained there until 1995 when defence cuts forced its closure as a naval base and naval air station (HMS OSPREY). And in 2012 the base and adjacent Weymouth Bay were the venues for the sailing events of the Olympics – a fitting use indeed for this huge, capacious anchorage painted here over a century ago by Charles Dixon.  It is truly an historic watercolour.