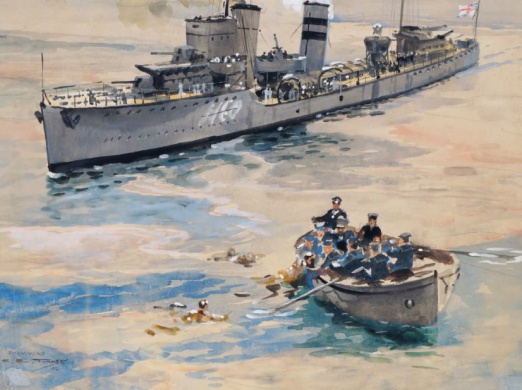 The destroyer HMCS OTTAWA started life as HMS CRUSADER, one of the C class ships of 1375 tons displacement, with an overall length of 254 feet and a useful speed of some 35 knots.  She was completed in 1931 and saw service in the British Home and Mediterranean Fleets. She returned home briefly for King George V's Silver Jubilee Review of the Fleets at Spithead in the summer of 1935 but because of the Mediterranean Fleet's heavy commitments during the Spanish Civil war she remained on station out there, based at Gibraltar, for the Coronation Fleet Review of June 1937.

In 1938 she was transferred to the Royal Canadian Navy and renamed HMCS OTTAWA and initially served on the Canadian Pacific Coast until transferred in the summer of 1939 to the Atlantic.  The outbreak of war saw her on Atlantic convoy escort duties in combination often with the British, and it was whilst she was with a fellow RN destroyer that she sank an Italian submarine in November 1941 in the North Atlantic.  At a time when the Allies were having a bad time at sea (November 1941 saw the sinking in the Mediterranean of two prominent 'war horses' (the carrier HMS ARK ROYAL and battleship HMS BARHAM), the submarine sinking was made much of by the Admiralty and it could very well be that this is the occasion that Turner has painted, OTTAWA rescuing the submariners.   But the story has a sad end for OTTAWA who herself was torpedoed on 14th September 1942 by the German submarine U91.  Her wreck lies on the eastern edge of the Newfoundland Grand Banks.