Snaffles (Charlie Johnson Payne) (1884-1967). watercolour and gouache on paper; signed in original hand (LR). Provenance: given as a thank you by the artist to the subject of the painting and thence by family descent to Sir James St Clair-Ford Bt. 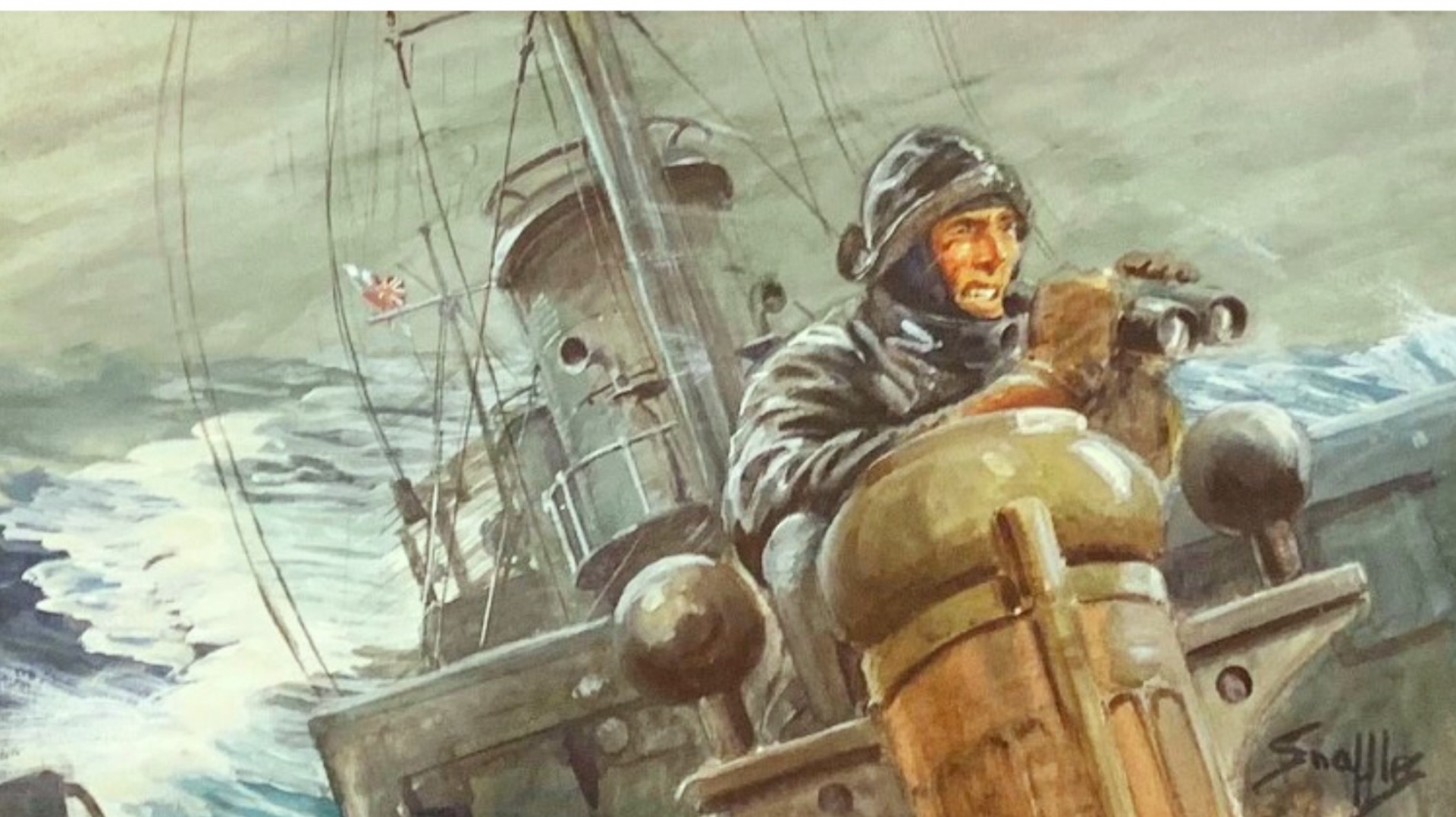 More than a rare bird!   This is an original watercolour which has never seen the light of day not even, unusually, as a reproduction.   This original has remained within the St Clair-Ford family since being painted by Snaffles in 1938/9 for Lieutenant Commander Aubrey St Clair-Ford RN, Commanding Officer of the destroyer we see here in the watercolour, HMS ENCOUNTER. Snaffles was a personal friend of the captain and was onboard the destroyer as his guest.

Titled by Snaffles "The Driver" it alludes to the naval tradition of Commanding Officers who talk about "driving HMS ...... and shows ENCOUNTER's captain in full foul weather oilskins and sou'wester standing at the binnacle on the bridge of his ship as he drives her through some filthy weather: its blowing a gale - the ensign is well on the lift and the sea is a welter of walls of water, breaking crests and spume. A large beam sea from port is rolling the destroyer more than a bit and from the way her captain is screwing up his eyes and the shine on his oilskins, there's plenty of driving rain and spray too - all the rigours, in short, of an open bridge destroyer in dirty weather!  The captain himself on the binnacle in the open sea and with his glasses at the ready indicates something unusual is afoot that requires him to take over from the officer-of-the watch: possibly some delicate manoeuvring is required......?

Aubrey St Clair-Ford was born in 1904, joined the RN in 1917 and served in HM Ships MARLBOROUGH and RODNEY (battleships), DAUNTLESS (light cruiser) and VESPER (destroyer).  In 1932 aged 28 he was given his first destroyer command, the destroyer WALKER,  and he then drove  KEPPEL and DUNCAN (destroyers) on the China Station.  In 1936 came another destroyer drive, HMS SARDONYX,  and so when he was appointed to ENCOUNTER in 1938 she was his 5th destroyer drive (he was still only 34).  He left her in August 1939 and in a hectic war career that followed, ENCOUNTER was subsequently sunk whist escorting the heavy cruiser HMS EXETER at the Battle of the Java Sea on 1 March 1942: both ships went down together.

Following ENCOUNTER and upon promotion to Commander, St Clair-Ford was appointed to drive a brand new destroyer, HMS KIPLING, who was serving with the Mediterranean Fleet.  She was part of the 5th Destroyer Flotilla (Captain D(5), Captain Lord Louis Mountbatten).  St Clair-Ford was appointed DSO for oustanding leadership and skill shown during the Crete evacuation of May 1941 during which HMS KELLY (Mountbatten) amongst many others, was sunk.  Three days after Christmas 1941 KIPLING concluded another outstanding action which finally resulted in the sinking of a submarine.  A bar to his DSO was awarded but his luck ran out and KIPLING was sunk by enemy aircraft during an action in the eastern Med in May 1942.  Three years later he was given command of the new Battle Cass destroyer HOGUE (his seventh destroyer drive).  Upon the death of his father he succeeded to the Baronetcy in 1948 and two years later saw Captain Sir Aubrey Sinclair-Ford Bt DSO* RN in command and Flag Captain of  the 6 inch light cruiser HMS BELFAST engaged in the Korean War along with some twenty five other British warships of the Far East Fleet and Commonwealth men of war.  Following this drive, the last of eight seagoing commands, he was appointed Commodore-in-Command of the shore establishment HMS DAEDALUS and he retired in January 1955, four rings on his arm, two DSOs and four Mention-in-Despatches ample evidence of a successful and highly experienced Driver.  He'd even manage to dodge a single desk job in Whitehall: Snaffes had chosen his subject well!