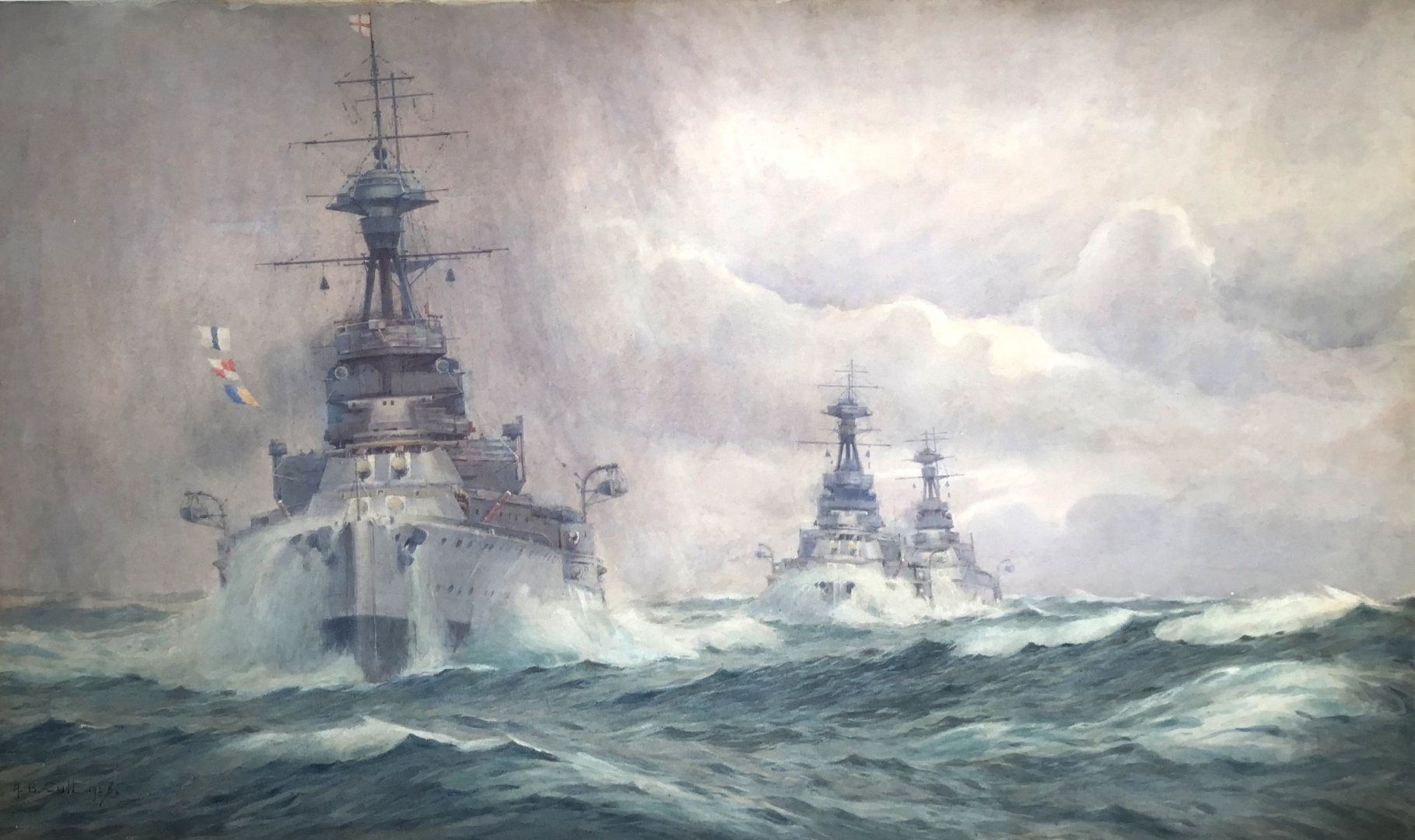 That this is indeed the 2nd Battle Squadron, Atlantic Fleet is in no doubt as Cull himself has written  this, in pencil in manuscript, on the back of the Artists’ board on which he has painted the watercolour.  He has also added, again in pencil, the names REVENGE, RESOLUTION and  RAMILLIES.  But interestingly Cull has dated his painting 1928 which doesn’t match the refit dates of, for instance, REVENGE, when she was safely tucked up in dockyard in refit. But even before then, her appearance had been significantly altered by the addition of a “runway” atop B turret from which spotting aircraft could be launched.  No sign of this in his painting and Cull was a stickler for detail!

We are therefore looking for an earlier date and an occasion which ties in with this scene of the three battleships breasting their way through a big Atlantic sea - and it has to be before August 1927 when REVENGE was transferred to the Mediterranean Fleet and was fitted with the runway; and before she went in for that year long refit. Unless, of course, Cull was simply commissioned to show all three ships together and he didn’t get around to ‘signing it off’ until 1928 – perfectly possible.  In the old Duke Street London Gallery of N R Omell (sadly now closed) a catalogue of marine art for sale between 10th -27th June 1985 shows no less than 8 watercolours by Cull, all dated between 1914 and 1928. All are from the collection of the fifth Earl Howe and several are clearly post dated, most conspicuously a cracker of a painting entitled “The Battle Cruiser Squadron, HMS HOOD, RENOWN and REPULSE at Sea”: it too is dated 1928 by Cull and measures precisely the same as this watercolour and shows the three ships – similarly from the port bow – crashing and pitching their way through a lively sea.  Photographs exactly like the painting appeared in the press in the autumn of 1926 (two years earlier than the watercolour is dated ) when the three battle cruisers were operating off  Portland in support of the high profile Imperial Conference being staged in London: the delegates were transported down to Portland and embarked in the three ships by boat.  The 1928 painting of the battle cruisers is too similar to the 1926 photographs to be mere coincidence - Cull has simply dated the painting two years after the actual event took place because 1928 is when he actually got round to putting brush to paper: and that I believe is what he’s done here. It’s a familiar and understandable procedure which is inevitable when busy artists have a stack of commisions building up.

1925/6 is the date that best meets the limiting criteria: REVENGE had been in commission as flagship of the 2nd BS for a year, Admiral Sir Henry Oliver KCB KCMG was Commander-in-Chief Atlantic Fleet with his flag in REVENGE with Captain D B N North CSI CMG as his Flag Captain. Also in the 2nd BS were HMS RAMILLIES (Captain E Wigram CMG DSO) and HMS RESOLUTION (Captain F A Marten CMG CVO), all three ships faithfully shown here by Cull together with Admiral Oliver’s cross of St George at the fore top gallant of REVENGE.  Admiral Oliver had commanded the 2nd Battle Cruiser Squadron in the Grand Fleet in World War 1, was Second Sea Lord in the early 1920s and shortly after leaving the post of C-in-C Atlantic Fleet in 1927 was promoted Admiral of the Fleet, being placed on the Retired List in 1933 after 54 years on the Active List.

His Flag Captain here, Captain Dudley North, went on to become Director of Naval Operations at the Admiralty in 1930, Chief of Staff Home Fleet in 1932 and in December 1934 he became Flag Officer Commanding Royal Yachts in which appointment he was promoted vice admiral in 1936; he was appointed KCVO in 1937 whilst flying his flag in HMY VICTORIA & ALBERT who, with Court Flags streaming from her three lofty masts was the centre piece of the large Fleet Review held in the Solent to mark the accession of King George VI. But then came disaster: appointed Flag Officer Commanding Gibraltar and Mediterranean Approaches in November 1939 and promoted to full admiral in May 1940 he was shortly afterwards to cross Winston Churchill and the Admiralty by stating his reservations at one of the terms given to the French:  to prevent elements of their fleet lying in North African ports being captured by the Germans and used against the Royal Navy, they would be sunk by the RN.  This was too much for Admiral North!

Nearly ordered there and then to haul down his flag by the First Sea Lord, Admiral Sir Dudley Pound, North was then considered to have compounded that ‘error of judgement’ by not ordering that the Vichy French naval squadron escaping through the Straits of Gibraltar for the Atlantic be intercepted by a British squadron.  Severely and maladroitly “long screwdrivered” by Churchill back in Whitehall throughout the time leading up to the actual escape North was placed in an impossible position by a succession of orders and counter orders by the man with the big cigar and he was relieved of his command in December 1940.  Boards of Enquiry followed and The First Sea Lord personally sacked him for what he perceived as a lack of action though there seems little doubt Pound was being leaned on heavily by Churchill. Eventually, after the war, Sir Dudley North was exonerated and to show his support for his former Yacht admiral, King George VI promoted him from KCVO to GCVO in 1947: it had been a rancorous affair from which Churchill emerged with little credit.  He must  have noted the King's support for his old shipmate and felt uncomfortable?

This painting is a classic Cull with its accurately drafted images of the three battlewagons, wonderfully realistic seas showing the ships ploughing and pitching their way through an unfriendly Atlantic; and as always he manages to create a very atmospheric painting with its leaden sky and cold, big rollers washing over the upper decks of the three battleships.  Fine detail is there aplenty but Cull always knew when to stop and not overdo the overall effect.

Afternote: microscopically close scrutiny of REVENGE does actually show what could indeed be the calipers around the 15 inch gun barrels associated with a runway!  Seen as they are from virtually dead ahead its not easy to pick these out but it does look as if both landing platform and runway along the length of the barrels are both there which dates the scene as 1927 -  but before August when REVENGE transferred to the Med Fleet. Personalities described earlier remain, however, unchanged.